Difference between revisions of "Steve Cohen"

Steven Cohen is a Democratic member of the United States House of Representatives, representing the 9th district of Tennessee.

Congressman Steve Cohen is a fourth-generation Memphian who has dedicated his life to public service. As a child, he was stricken with polio, but through hard work, he was able to beat this debilitating disease. [1]

Cohen established legal practice in 1978 after serving as a legal advisor for the Memphis Police Department.[3]

During his 24 years in the Tennessee State Senate, Congressman Cohen amassed a strong record of passionate, honest and unselfish service. He consistently spurned special interests to stand up for the people’s interests. On issues ranging from women's rights to animal welfare, Congressman Cohen was a relentless advocate in the Tennessee State Senate even in the face of overwhelming opposition. Before he was elected to Congress, he became known throughout the state as the “Father of the Tennessee Lottery,” after leading the referendum effort that instituted arguably the most successful education initiative in Tennessee history. [4]

Upon election to the U.S. House of Representatives in 2006, Congressman Cohen immediately distinguished himself on the Hill for his "thoughtful legislation and quick wit". His pointed questioning of Bush Administration officials like Alberto Gonzalez, David Addington, Monica Goodling and Michael Mukasey in the highly influential Judiciary Committee quickly earned Congressman Cohen the reputation as a champion of government accountability and a fierce interrogator. Speaker Nancy Pelosi even referred to him as the “conscience of the freshman class” in 2008. In August of 2008, he was instrumental in passing H.Res.194, a House resolution apologizing for the enslavement and racial segregation of African Americans. [5]

Cohen, a five-time JStreetPAC endorsee, has been a strong friend of the pro-Israel, pro-peace movement. He has consistently supported J Street-backed initiatives in Congress and taken a leadership role in encouraging his colleagues to do the same..[10]

As of February 20 2009 Steve Cohen was listed as a member of the Congressional Progressive Caucus.[11]

The Populist Caucus was founded on February 11, 2009 in the United States House of Representatives by Democrat Bruce Braley of Iowa. The caucus originally included 26 other Democrats in the House, including Steve Cohen.

Cohen received $1225 in lobbying funds from Planned Parenthood in 2008.

Rep. Cohen sent Marilyn Dillihay to Cuba for 3 days in March/April 2010. The trip was courtesy of a $2,127.40 grant from the Institute for Policy Studies connected Center for Democracy in the Americas... "Fact-finding trip to understand the importance and culture of U.S. policy toward Cuba" .[13]

Jim Maynard is a leader of Memphis Democratic Socialists of America. [14]

An array of groups on the political left gathered in Midtown Memphis, June 2011 to protest recent decisions and policies from the right.

They were protesting recent proposals from the Tennessee legislature, including removing funding from Planned Parenthood, ending collective bargaining for teachers and a measure that would prevent teachers from discussing homosexuality in classes.

"This last legislative session in Nashville should serve as a wake-up call for us," Michelle Bliss with TEP said. "We're here, we're together and we will not be quiet."

State Sens. Beverly Marrero and Antonio Parkinson joined the rally, as did city school board member Jeff Warren and County Commissioner Steve Mulroy. U.S. Rep. Steve Cohen showed up near the end of the event.[15]

In 2013 Progressive Democrats of America assigned activists to deliver their material to almost every US Congressman and several Senators. Michael Barrach, was assigned as contact for Rep. Cohen.[16] 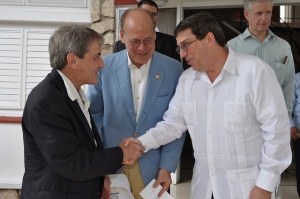 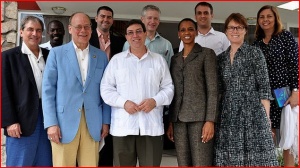 Just back from a trip to Cuba, in March 2011, U.S. Rep. John Yarmuth said that it's time for the United States to normalize relations with its island neighbor.

"Nobody is winning from our policy there," the 3rd District Democrat said in an interview. "We aren't winning and they aren't winning. There's no question it's time to normalize relations."[17]

The trip was sponsored by the Center for Democracy in the Americas, whose goal is to open Cuba and improve U.S. relations with that nation and others in Latin America.[18]

Just back in Memphis after a five-day fact-finding trip to Cuba, U.S. Rep. Steve Cohen said he was surprised at the lack of interference with the practice of religion and impressed with the slow but evident moves toward economic privatization on the island nation.

The trip with two other members of Congress during a recess was paid for by the Center for Democracy, a non-partisan, non-profit devoted to promoting democracy.

The Memphis Democrat said he met with the Cardinal Archbishop of Havana, Jaime Ortega, and was given assurance that the 75 parishes there are free of restrictions.

He also met the president of the Cuban National Assembly, Ricardo Alarcon. In discussions with the Cuban foreign minister, it was made clear that the era of Fidel Castro is over and that his brother, Raul, is now fully in charge.

"Raul understands the changes that have to be made," Cohen said. "They're trying to make the economy less socialistic … and more free-market." He said some attitudes from the Cold War are still evident and that some of the "old guys" on both the Cuban and American sides are going to have to "die off" before normal relations are established.[19] 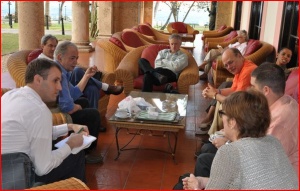 Due to your action/emails/phone calls we have 59 signatures from House representatives urging President Obama to support travel to Cuba by granting general licenses for ALL current categories of travel.

By eliminating the laborious license application process, especially for people-to-people groups, that is managed by the Office of Foreign Assets Control (OFAC), the majority of the bureaucratic red tape that holds up licensable travel to Cuba would disappear and actually facilitate what the President wanted to see in 2011, liberalized travel regulations. 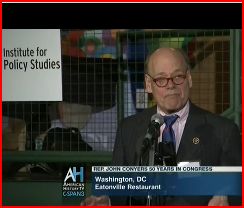 January 7 2015, "John Conyers’ 50 Years of Service", was celebrated at Andy Shallal's Eatonville Restaurant in Washington DC., primarily sponsored by the Institute for Policy Studies. Guests included Robert Creamer, and Irvin Jim of the National Union of Metalworkers of South Africa (a self proclaimed Marxist-Leninist)[21], and members of the Congressional Black Caucus and Congressional Progressive Caucus. Robert Borosage sent a tribute.

Friends and colleagues of Congressman Conyers from all stages of his work for civil rights, peace, human rights attended.[22]

The Representatives urged the President to nominate a DEA Administrator who is willing to work with state and federal officials to create policies that work with­—not against­­—the evolving landscape of state marijuana laws. The letter states that retiring DEA director Michele Leonhart placed too great an emphasis on prosecuting marijuana use and not enough on drug-related activity that truly poses a public-safety risk.

“The DEA plays a critical role in promoting the health and safety of Americans. But to succeed in its mission, it must refocus its efforts on cracking down on bad actors who seek to evade state laws rather than those who abide by them,” the Representatives wrote. “All of us share a commitment to keeping drugs out of the hands of children, diminishing the reach of criminal cartels, and helping individuals who are addicted to drugs find the help they need to turn their lives around.

“To accomplish these aims, the DEA must end its resistance to the changing public consensus on marijuana use and stop expending its limited resources to prosecute individuals who are not a threat to public safety and, instead, focus on drug activity that poses a more serious risk,” they added.[24]

The following have worked as staff members for Steve Cohen:[25]