Difference between revisions of "Sarah Pillsbury"

Sarah Pillsbury, a film producer and philanthropist, received her bachelor’s degree from Yale in 1974 and moved to Los Angeles where she attended UCLA film school. She began her career working in documentaries and was the associate producer on The California Reich, which was nominated for an Academy Award for Best Documentary Feature.

In 1976, she co-founded the Liberty Hill Foundation to support progressive organizing in Los Angeles. In 1979, she produced Ron Ellis’ Board and Care, which won the Academy Award for Best Live Action Short Subject.

Pillsbury is a native of Minnesota and has two children, Nora and Will. She lives in Pacific Palisades.[1]

Pillsbury joined forces with Midge Sanford in 1981 to form Sanford/ Pillsbury Productions. Together they have produced nine feature films including Desperately Seeking Susan, River’s Edge, Eight Men Out, Love Field, and How to Make an American Quilt. Additionally, they have produced four television films including the Emmy Award-winning HBO film And the Band Played On. Pillsbury has participated in numerous conferences and as a guest speaker at many universities and films schools including UCSB, UCLA, USC, the American Film Institute, the North Carolina School of the Arts, and Yale University, where she received a Tercentennial Medal.[2] 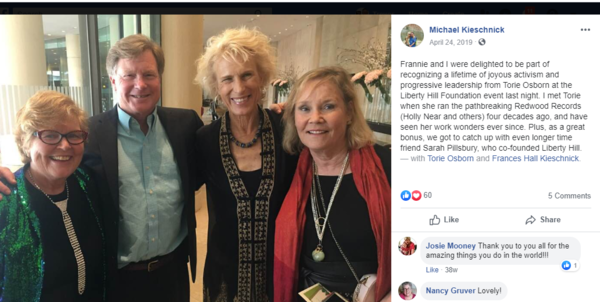 Frannie and I were delighted to be part of recognizing a lifetime of joyous activism and progressive leadership from Torie Osborn at the Liberty Hill Foundation event last night. I met Torie when she ran the pathbreaking Redwood Records (Holly Near and others) four decades ago, and have seen her work wonders ever since. Plus, as a great bonus, we got to catch up with even longer time friend Sarah Pillsbury, who co-founded Liberty Hill. — with Torie Osborn and Frances Hall Kieschnick.

Pillsbury continues to serve on the Board of Directors of the Liberty Hill Foundation, as well as the Board of Trustees of Occidental College and the Board of Directors of Artists for a New South Africa. She is on numerous advisory boards, including the Minnesota Film Board and the Progressive Los Angeles Network (PLAN). She is a member of the Academy of Motion Picture Arts and Sciences, the Academy of Television Arts and Sciences and the Los Angeles Institute for the Humanities.[3]

Signatories to a letter from Westside Friends of Jackie Goldberg, dated January 15, 1993 were;

Circa 2002 , Sarah Pillsbury, Sanford/Pillsbury Productions, served on the Advisory board of the Democratic Socialists of America dominated Progressive Los Angeles Network.[6]

As at 2009, Sarah Pillsbury, Co-Founder and Board Emeritus, was on the Board of Directors of the Liberty Hill Foundation, a Los Angeles based organization seeking to advance movements for social change through a combination of grants, leadership training and alliance-building.[7]