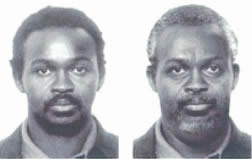 Template:TOCnestleft Ronald Stanley Bridgeforth is currently wanted by the FBI for "Unlawful Flight to Avoid Prosecution - Assault on a Police Officer."

Wanted by the FBI

Ronald Stanley Bridgeforth is wanted for his alleged involvement in attacks on law enforcement officials in California, including the August 29, 1971, attack on San Francisco's Ingleside Police Station in which a Police Sergeant was shot and killed. Law enforcement investigation determined that this act of violence was committed by members of an extremist group known as the Black Liberation Army (BLA). The BLA had undertaken a series of attacks on police targets consisting of shootings, bombings, and attempted bombings beginning in the late 1960s and continuing through the 1970s. These attacks resulted in the deaths of several police officers around the nation.

Bridgeforth was alleged to be a member of the BLA and was detained on November 5, 1968, in South San Francisco after attempting to purchase merchandise with a stolen credit card. During questioning, Bridgeforth pulled out a revolver and fled the area. A pursuit ensued, followed by a gun battle in which Bridgeforth was wounded. He was taken into custody and charged with attempt to kill a public official and assault on a police officer with a deadly weapon. He pled guilty to these charges and was ordered to appear in court for sentencing on April 11, 1969. Bridgeforth failed to appear for sentencing and a bench warrant was issued for his arrest. A federal arrest warrant was issued in the United States District Court, Northern District of California, San Francisco, California, on June 18, 2004, charging Bridgeforth with unlawful flight to avoid prosecution.

Additionally, on January 18, 2007, California state arrest warrants were issued for Bridgeforth charging him with murder and conspiracy to murder police officers based on the multiple attacks/murders and bank robberies committed by the BLA, and in connection with the 1971 attack on the Ingleside Police Station allegedly committed by Bridgeforth and other members of the BLA.[1]

Bridgeforth should be considered armed and dangerous.