On March 21, 2010, The Justice Caucus held their annual award and fundraising dinner in honor of the life of Millie Jeffrey. The dinner was held at the Courtyard by Marriott, 3205 Boardwalk Dr., Ann Arbor. The keynote speaker was Governor Madeleine M. Kunin (Vermont) and the MC for the night was Michael McGuinness, chair of the Oakland County Democratic Party. The following progressive activists were recognized with the Millie Jeffrey award, "reflecting their commitment and work for economic and social justice": Elizabeth Bunn, secretary-treasurer of the UAW; Maryion T. Lee; Ethel Schwartz; and Ron Scott. Sarah Juster, an Ann Arbor high school student "who has shown exceptional leadership in the fight against genocide and to provide relief to the refugees of Darfur," received the Millie Jeffrey Rising Star Award.[1] 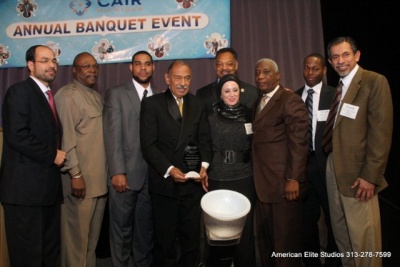 The 2010 Michigan CAIR gala, was held on March 31, with about "1,000 attendees including many powerful audience members from the business, media, and political community". Present at this year’s fundraiser was Nihad Awad, who founded CAIR and set it up as a not-for-profit franchise operation of sorts, with now branch offices across the country to advocate for Muslims.

But the real jewels in the crown of the 2010 CAIR Michigan fundraiser were the civil rights workers who for sixty years have been deeply involved at their own personal peril with the struggle for civil rights in the USA.

Jesse Jackson , the keynote speaker, was one of those. But there was also Rep. John Conyers (D-MI-14), whom Jackson described as “perhaps the only man who was ever endorsed by Martin Luther King.” There was Rep. John Dingell (D-MI-15). There were many others, including the strong gubernatorial candidate Virg Bernero (currently Lansing’s mayor).