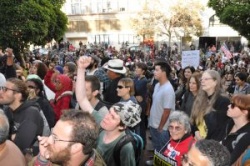 Protestors at the Occupy Oakland demonstration

The following organizations have supported or joined with the Occupy Cleveland demonstration:[1]

The National Lawyers Guild is serving as the arrestees' legal team.[3]

Alliance of Californians for Community Empowerment

On Nov. 19, Tanya Dennis of the Alliance of Californians for Community Empowerment (ACCE) spoke at a rally held at the downtown plaza which for over a month had housed the main Occupy Oakland camp. She told how with ACCE's help she fended off a foreclosure attempt earlier this year and won a modification of her mortgage. "So we can stand up to the banks and we can prevail!" she declared to loud applause. Dennis urged rally-goers to join in a Dec. 6 national day of action "where people are going to reoccupy homes that have been foreclosed."[4]

The following have addressed the protestors:

Oakland Police evicted the demonstrators early in the morning on Oct. 25.

Writing for the CPUSA's newspaper People's World, Marilyn Bechtel commented on the demonstrators' response to the eviction:[5]

"Soon after the eviction, the Alameda Labor Council posted a resolution on its web site, saying it "shares the outrage, frustration and resolve of the protesters, commits to the fight, and goes on record in support of the Occupy Oakland and the entire Occupy Wall Street movement." The resolution further backed protesters' right to peaceful assembly and opposed "any efforts to unreasonably evict protesters based on unsupported claims of public safety." It said the mayor and the City Council "are on the wrong side of history," and called on the city to drop charges against those arrested and restore the occupation. The California Nurses Association/National Nurses United issued a similar statement, and the Asian Pacific Environmental Network issued a petition calling on the mayor to stop police repression against the protesters...

...Speaking on public radio station KQED Oct. 26, City Council President Pro Tem Ignacio de la Fuente pointed out that Mayor Quan "tried from the beginning to establish a dialogue" with protesters and to allow them to use the plaza during the day, and noted what he called "the infiltration" of people totally opposed to the police."

An article by William West and Richard Becker published in Liberation (newspaper of the Party for Socialism and Liberation) described the demonstrator's actions during the last week of October:[6]

"Occupiers retook Oscar Grant Plaza only two days after their camp was destroyed by police. The protesters tore down a fence that the police had erected around the supposedly public space and built a tower from the fence as a monument to their resolve. Within 48 hours of the attack, two dozen tents and two canopies had been restored to the Plaza. The occupiers' first action after retaking their camp was to hold a vigil for Scott Olsen. Having become the subject of negative press over nearly killing Olsen, the Oakland Police Department is so far not interfering with the re-establishment of the camp.

Oakland Mayor Jean Quan, who helped plan the Oct. 25 attack against the encampment, attempted to address the Occupation at its General Assembly but was booed off the stage, with the Occupiers chanting “Go away!” as she attempted to speak."

It is notable that Quan is a former Maoist and a veteran of the student movement of the 1960's. She once "identified" with the defunct Maoist Communist Workers Party.[7]

Occupy Oakland's general assembly decided to stage a "Mass Day of Action" on Nov. 2, 2011, after the dismantling of the camp the week prior. Marilyn Bechtel, writing in the CPUSA's newspaper, People's World wrote of the action,[8]

"While organizers called for a "general strike to shut down Oakland and the 1 percent" they also said they recognized that not all workers would strike, and they welcomed "any form of participation which they feel is appropriate." Actions are slated for early morning, noon and evening, to encourage the greatest participation.

The Alameda Labor Council said its affiliated unions "stand in solidarity with Occupy Oakland and the 99 percent." It is encouraging unions and individual members "to take whatever solidarity actions they deem appropriate to support Occupy Oakland and draw attention to the need for good jobs, ethical banking practices, quality public services and a system where everyone, including the rich and corporations, pays their fair share." The Labor Council is serving dinner to all Day of Action participants starting at 4:30 p.m.

On the evening of Nov. 1, the East Bay Alliance for a Sustainable Economy (EBASE) is holding a "Swag'n for Justice" concert and rally to press for quality jobs at the upcoming redevelopment of the Oakland Army Base. On Nov. 3, protesters will join the California Nurses Association in a late morning action in San Francisco in solidarity with international protests against the G20 finance ministers and central bank governors during their meeting in Nice, France. The nurses have been staffing the Oakland encampment's first aid facilities.

While pointing out that they are not asking members to strike, Teamsters Local 70 urged them to participate in the day of action during their off hours, wearing their "Teamsters gear." Dwight McElroy, president of SEIU Local 1021's Oakland chapter, said in a statement, "We are also part of the 99 percent. Our jobs have been cut, our people are unemployed, and our community has lost needed services in these hard times."

The Oakland Education Association endorsed the Nov. 2 actions, and is urging members "to participate in a variety of ways," including taking personal leave to join actions, doing informational picketing and holding teach-ins at school sites. The OEA has been funding the porta-potties at the camp site. Among the many community organizations participating is the disability rights organization CUIDO, which will hold a rally and teach-in to protest impending federal and state cuts impacting the disability community, as well as participating via van shuttle in the community picket at the port."