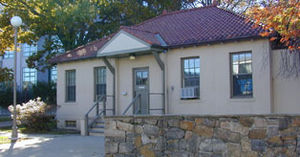 The Michael Harrington Center for Democratic Values and Social Change operates out of the Queens College of the City University of New York, 65-30 Kissena Boulevard, Flushing, New York 11367-1597. The Center was founded, circa 1990, in honor of Michael Harrington, a campaigner for social justice;

The Center exists to promote public, democratic discussion of social issues, to advocate for social change and to work in partnerships with others to build a more just, equitable and democratic society. The Center is concerned with the employment, education, health, and community needs of the economically disadvantaged, as well as conflict resolution. The conflict resolution work of the Michael Harrington Center and the academic curriculum it has developed regarding America and the Middle East as well as its cultural diplomacy programming for the broader community has increasingly become a central part of the Center's mission. Information is included under the subtitle "Meeting of Minds".[1]

The Harrington Centre was funded by City University of New York (CUNY), and chaired by the late President of CUNY and former Peace Corps Director in Ethiopia, Professor Joseph Murphy.[2]