Difference between revisions of "Marian Kramer" 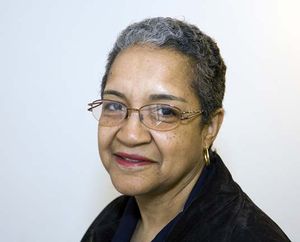 Marian Kramer has been at the forefront of the struggle of the poor, and a leader in the fight to stop the privatization of water in Detroit, Michigan. She has been the front lines of the welfare rights and civil rights movement from its origin in the 1960s. Kramer serves as the Co-chair of the National Welfare Rights Union.[1]

In 1968 and 1969, former Wayne State students such as General Baker, Marian Kramer, Ken Cockrel, Ken Hamblin, Luke Tripp, Charles Johnson, and others organized the Revolutionary Union Movement in Detroit’s auto plants, which culminated in the League of Revolutionary Black Workers. Some of the organizers who split from the League joined former SNCC leader James Forman and founded the Black Workers Congress.[2]

National Conference to Reclaim Our Cities

People from the throughout the state of Michigan and delegations from New Orleans, Cleveland, Baltimore, New York and other cities will converge on the Wayne State University campus to develop strategies for the rebuilding of urban areas around the country. Under the theme: "Money to Rebuild New Orleans and all U.S. Cities, Not for War," this national meeting of grassroots, labor and peace activists will call for the feeding of the cities and the starving of the Pentagon.

Demanding funds for jobs, housing, Social Security, schools, healthcare and the environment, the conference will focus on the Bush administration's budget which slashed 150 domestic programs while it pushes the spending for war to over half a trillion dollars a year. Organizers of the event say that it is time to launch a struggle to win the right to healthcare, quality education, decent housing, food, utilities, and jobs at living wages.

All day Saturday, November 12, there will be plenary sessions and workshops to discuss solutions to the urban crises across the United States and the role of the increasing militarization of both domestic and foreign policy of the national government.

This conference was open to the general public and was sponsored by the WSU student chapter of the the Workers World Party front Michigan Emergency Committee Against War & Injustice.[4]

As at October 5, 2008, Kramer served as Co-chair on the board of the National Welfare Rights Union.[5]