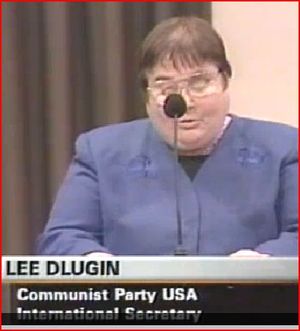 Lee Dlugin is a Communist Party USA activist. She is the daughter of communist leader Sam Dlugin.

In 2001, Lee Dlugin previously Party International Secretary, agreed to become the Party's Comptroller. One of the priorities was to staff the Finance Department, another strategic move. The National Board collectively agreed that to make breakthroughs in finances needed to add capable and politically experienced cadre, like Lee and Pat Barile, who has also joined the Finance Department[1].