Korean Resource Center was founded in 1983 with “a mission to empower the Korean and Asian American community through services, education, organizing and advocacy.” The organization, operates offices in Los Angeles and Orange County, California, and serves more than 11,000 low-income, recent immigrant families through public health and social services, immigration legal services and housing counseling each year. [1]

KRC has offices in Los Angeles and Orange County. It is a founding affiliate of the National Korean American Service and Education Consortium (NAKASEC), founded to advance a national progressive Korean American agenda.[2] 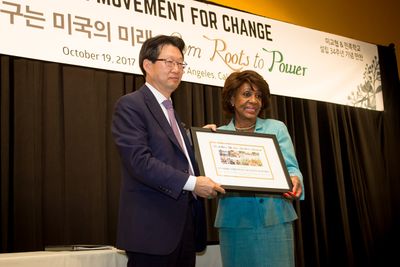 Congresswoman Maxine Waters (CA-43), was awarded the “Standing Up for Justice” recognition by the Korean Resource Center (KRC) and the National Korean American Service and Education Consortium for her commitment to women, children, people of color, and low-income communities during their 34th Annual Gala, October 19, 2017, in Los Angeles.

“It is such a tremendous honor to be recognized by the Korean Resource Center and the National Korean American Service and Education Consortium for my efforts to advocate for minority communities in greater Los Angeles,” said Congresswoman Maxine Waters. “These two organizations have fought tirelessly on behalf of immigrants and people of color, particularly Asian American and Pacific Islander communities. Their efforts have strengthened our democracy, and I am so pleased to join with them to celebrate all they have accomplished over the past 34 years.”

During her acceptance speech, Congresswoman Waters discussed recent actions by the Trump Administration that have targeted immigrant communities, most notably the decision to end the Deferred Action for Childhood Arrivals program (DACA) which could impact more than 800,00 young people -- 200,000 of which live in California -- and upend the stability of nearly 50,000 school-age children living in Los Angeles County that will become eligible for DACA in future years.

“To all those who have been affected by Donald Trump’s anti-immigrant actions, I want you to know I have your back and so do my Democratic colleagues in the House and Senate,” said Congresswoman Waters. “We are fighting every day to hold Donald Trump and Congressional Republicans accountable, and we will continue to push for a bipartisan solution for DACA before the clock runs out.”

KRC is the California affiliate of NAKASEC. Together, the organizations advocate for “just and humane comprehensive immigration reform.”

"The Korean Resource Center and the National Korean American Service and Education Consortium were thrilled to honor Congresswoman Maxine Waters at their Building a Movement for Change Annual Gala on October 19th. Her powerful words were inspiring and clearly moved the audience to want to take action. It was one of the best speeches we have had at our gala in over 34 years," said Becky Belcore, NAKASEC Co-Director.

"Congresswoman Maxine Waters is a fierce advocate for the DREAM Act, immigrant rights and all marginalized communities. Her speech energized us for the fight ahead and we are so proud to have her as our Congresswoman and ally," said Dae Joong Yoon, KRC President.[5]