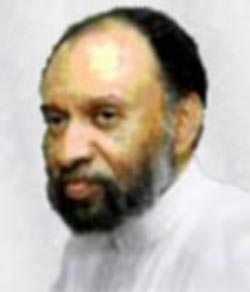 Khalid al-Mansour, formerly Donald Warden, is a Texas based activist.

In a televised interview in 2008 on New York's all news cable channel, NY1, 88-year-old Percy Sutton, a former borough president of Manhattan and a credible mayoral candidate in 1977, made some interesting revelations about his links to the young Obama.

Sutton told NY1 reporter Dominic Carter on the show "Inside City Hall": "I was introduced to (Obama) by a friend who was raising money for him." He asked Sutton to write a letter in support of Obama's application to Harvard Law School.

"The friend's name is Dr. Khalid al-Mansour,(formerly Donald Warden, mentor of Black Panther Party founder Huey Newton and his associate, Bobby Seale) from Texas," Sutton said. "He is the principal adviser to one of the world's richest men. He told me about Obama."

Sutton recalled that al-Mansour said that "there is a young man that has applied to Harvard. I know that you have a few friends up there because you used to go up there to speak. Would you please write a letter in support of him?" Sutton did.

According to Newsmax columnist Kenneth Timmerman, "At the time, Percy Sutton, a former lawyer for Malcolm X and a former business partner of al-Mansour, says he (al-Mansour) was raising money for Obama's graduate school education, al-Mansour was representing top members of the Saudi Royal family seeking to do business and exert influence in the United States."

a November 1979 column by TV commentator and respected Chicago Tribune columnist Vernon Jarrett with the title "Will Arabs Back Ties To Blacks With Cash?"

The late Vernon Jarrett was the father-in-law of Valerie Jarrett, who would go on to become what Miele calls "the consigliere of the Obama White House." Mr. Jarrett was a colleague and one of the best friends of Frank Marshall Davis, the former Chicago journalist and lifelong communist who moved to Hawaii in the late 1940s and years later befriended Stanley and Madelyn Dunham and their daughter Stanley Ann, mother of Barack Obama.

Davis is known to have taken an active role in the rearing of young Obama from the age of 10 until he turned 18 and left Hawaii for his first year at Occidental College in Los Angeles in 1979. That was the same year al-Mansour was seeking Arab financial support for students such as Obama.

Vernon Jarrett's column details how al-Mansour told him about a proposal he made to OPEC Secretary-General Rene Ortiz regarding a program to spend "$20 million per year for 10 years to aid 10,000 minority students each year, including blacks, Arabs, Hispanics, Asians and native Americans."

These minority students would then migrate through the political system promoting Palestinian and radical Islamist causes. Al-Mansour told Jarrett that the program had been endorsed by Ortiz and other OPEC administrators.[1]

At the start of the 1960s, however, Donald Harris’s search for “alternative approaches” would bear more fruit off campus than on, where fewer than a hundred of Berkeley’s 20,000 students were black. United by a sense of isolation and displacement, a dozen of them began to gather at the Harmon Street house of Mary Lewis, an undergraduate from Detroit. Shyamala and Donald soon joined the group; Lewis eventually became Shyamala’s “closest confidante” and Kamala’s godmother, according to “The Truths We Hold.”

“I was awed by them,” says early member Aubrey Labrie, whom Kamala eventually came to know as “Uncle Aubrey.” (Lewis was “Aunt Mary.”) “They were intimidatingly smart. They had a determined kind of posture about them.”

Every Sunday, Lewis would host student intellectuals as they “socialized and talked politics incessantly,” writes Donna Jean Murch in “Living for the City: Migration, Education, and the Rise of the Black Panther Party in Oakland, California.” “Fidel Castro and Che Guevara were the heroes of some of us,” Labrie recalls. “We would talk about Black Muslims, the liberation movements going on in Africa, everything.”

They would also read. As both Murch and Harris note in their books, the initial syllabus was full of “classic black history texts” such as W.E.B. DuBois’s “The Souls of Black Folk,” Carter G. Woodson’s “The Miseducation of the Negro” and Ralph Ellison’s “Invisible Man.” But it was the more contentious readings — the ones Harris doesn’t mention — that proved most influential: E. David Cronon’s “Black Moses: The Story of Marcus Garvey,” which celebrated Garvey’s pioneering emphasis on racial pride and self-determination; Melville J. Herskovits’s “The Myth of the Negro Past,” which championed pan-Africanism in culture and religion; E. Franklin Frazier’s “Black Bourgeoisie,” which criticized a compliant black middle class.

The people close to Kamala Harris’s parents were never Black Panthers. But they did embrace an embryonic version of the philosophy that later came to be known as “Black Power”: black pride, black autonomy and the creation of black political and cultural institutions. According to Labrie, Shyamala Gopalan was the original study group’s only non-black member — the exception that proved the rule. “Her inclusion had a lot to do with the fact that we were really supportive of the Third World liberation movement, so we didn’t really get into that whole debate who was ‘black’ or not,” Labrie says. “But I will admit that a white person wouldn’t have been welcome into that kind of setting. It wasn’t because there was hostility towards them. We just felt more confident and comfortable getting our own thoughts and information together as black people.”[2]