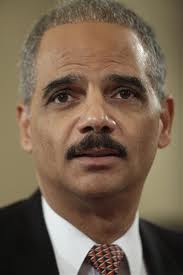 Eric Holder was the 82nd Attorney General of the United States from 2009 to 2015. The National Democratic Redistricting Committee is chaired by Eric Holder.[1]

Judge, lawyer, political advisor. Born Eric Himpton Holder, Jr. on January 21st, 1951, to parents Eric and Miriam Holder in New York City. His mother was a telephone operator, and his father was a real estate broker. His parents both held strong ties to Barbados; his father emigrated from Saint Joseph, and his mother's family emigrated from Saint Philip. The eldest of two brothers, Holder grew up in the predominantly black neighborhood of East Elmhurst, Queens.

Holder attended a public school in his neighborhood until the fourth grade, when he was selected to participate in a program for intellectually gifted children. The school consisted of predominantly white students, which Holder says forced him to keep his "foot in both worlds." This only became more apparent when it came time to attend high school. While his friends at home chose to attend public schools in Queens, Holder's white schoolmates were taking an exam to enter the city's most elite institutions. Holder got into the prestigious Stuyvesant High School, an hour-and-a-half commute from his home.

Holder says he concentrated mainly on his studies in high school, and felt overwhelmed by the rigorous academic demands placed on him at Stuyvesant. But the young man stayed well rounded; he was selected as the captain of the basketball team, and in 1969 he earned his high school diploma, as well as a Regents Scholarship.

That same year, Holder entered college at Columbia University. He played freshman basketball, attended shows at the Apollo Theater in Harlem, spent Saturdays mentoring local kids, and became active in civil rights. He received his bachelor's degree in American history from Columbia University in 1973. In 1974, he began attending Columbia Law School while also clerking for the NAACP Legal Defense Fund and the Department of Justice's Criminal Division.

In 1976, Holder earned his law degree, and The Department of Justice gave him a job as part of the attorney general's honors program. He was assigned to the newly formed Public Integrity Section, which investigated and prosecuted official corruption on the local, state and federal levels.[2] 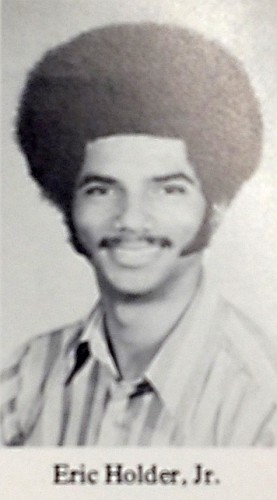 As a freshman at Columbia University in 1970, future Attorney General Eric Holder participated in a five-day occupation of an abandoned Naval Reserve Officer Training Corps (ROTC) headquarters with a group of black students later described by the university’s Black Students’ Organization as “armed.”

Holder was then among the leaders of the Student Afro-American Society, which demanded that the former ROTC office be renamed the “Malcolm X Lounge.” The change, the group insisted, was to be made “in honor of a man who recognized the importance of territory as a basis for nationhood.”

Black radicals from the same group also occupied the office of Dean of Freshman Henry Coleman until their demands were met. Holder has publicly acknowledged being a part of that action.

The details of the student-led occupation, including the claim that the raiders were “armed,” come from a deleted Web page of the Black Students’ Organization (BSO) at Columbia, a successor group to the SAAS. Contemporary newspaper accounts in The Columbia Daily Spectator, a student newspaper, did not mention weapons.

Holder has bragged about his involvement in the “rise of black consciousness” protests at Columbia.

“I was among a large group of students who felt strongly about the way we thought the world should be, and we weren’t afraid to make our opinions heard,” he said during Columbia’s 2009 commencement exercises. “I did not take a final exam until my junior year at Columbia — we were on strike every time finals seemed to roll around — but we ran out of issues by that third year.”

Though then-Dean Carl Hovde declared the occupation of the Naval ROTC office illegal and said it violated university policy, the college declined to prosecute any of the students involved. This decision may have been made to avoid a repeat of violent Columbia campus confrontations between police and members of Students for a Democratic Society (SDS) in 1968.

The ROTC headquarters was ultimately renamed the Malcolm X lounge as the SAAS organization demanded. It later became a hang-out spot for another future U.S. leader, Barack Obama.

Holder also claimed in his 2009 speech that he and his fellow students decided to “peacefully occupy one of the campus offices.” In contrast, the BSO’s website recounted its predecessor organization’s activities by noting that that “in 1970, a group of armed black students [the SAAS] seized the abandoned ROTC office.”

While that website is no longer online, a snapshot of its content from September 2010 is part of the archive.org database.

In a December 2010 GQ magazine profile of Holder, one of his Columbia friends confirmed that he and Holder were both part of the ROTC office takeover.

Holder particularly “connected with four other African-American students” at Columbia, correspondent Wil S. Hylton wrote. “We took over the ROTC lounge in Hartley Hall and created the Malcolm X Lounge,” said a laughing Steve Sims, one of those students.

Hylton described Sims as “the attorney general’s closest friend” and “a man Holder describes as his ‘consigliere.’”[3]

Appointments Under Reagan, Clinton and Bush

In 1988, Holder was nominated by former President Reagan to become an associate judge of the Superior Court of the District of Columbia. During this time he presided over hundreds of civil and criminal trials. Holder was then nominated by President Clinton to serve as the U.S. attorney for Washington, D.C. in 1993.

During his four-year term, he created a domestic violence unit, a community prosecution project, and a program for restricting gun laws.

In 1997, President Clinton nominated him to be the deputy attorney general. Holder was quickly confirmed several months later by a unanimous vote in the Senate.

As deputy attorney general, Holder developed and issued the "Holder Memorandum," which spelled out the guidelines for the criminal prosecution of corporations. He also developed rules for the regulation of health care, and assembled a task force that determined how to investigate criminal investigations of high-ranking federal employees.

At the president's request, Holder created the organization, Lawyers for One America. The group was designed to bring greater diversity to the law profession, and increase pro bono work among the nation's lawyers. Holder also briefly served under President Bush as Acting Attorney General, during the pending confirmation of Attorney General John Ashcroft.

After serving in this position for four years, Holder joined the private sector to work at the law firm, Covington and Burling LLC, in 2001. He continues to work at the firm, representing clients such as the National Football League during its investigation of quarterback Michael Vick, and the negotiation of an agreement with the Justice Department for Chiquita Brands International.[4]

In addition to his normal workload, Holder serves on a number of philanthropic boards, including the Columbia University board, the Save the Children Foundation, and Concerned Black Men, a group that seeks to help troubled youth in D.C. He has also been nationally recognized for his work in the law profession; he was featured in the 2007 edition of The Best Lawyers in America, and in 2008 he was named by The National Law Journal as one of "The Most 50 Influential Minority Lawyers in America" as well as by Legal Times for being one of the "Greatest Washington Lawyers of the Past 30 Years."[5]

In January 2009 Eric Holder was nominated[7]by the Obama administration for the position of Attorney General in the DOJ and confirmed in February 2009.

All these founders spoke at the anniversary event. There were speeches too by Attorney General Eric Holder and actor Danny Glover.[8]

Glover and Holder were too young to be part of SNCC, but both emphasized that they would not be where they are today without SNCC and its heroic struggle for African American liberation...

Attorney General Holder said SNCC played an important role in making it possible for him to be the first African-American attorney general. He said there is much to be done and urged all of us to continue the struggle.

U.S. Attorney General Eric Holder spoke at the funeral of one of his mentors, civil rights leader Percy Sutton, January 6, 2010 at Riverside Church in New York City. Thousands mourned the legendary civil rights attorney and media owner Percy Sutton who died December 26 at the age of 89.[9]

Holder called Sutton "one of the nation's true heroes."

"I admired, respected and worked for him," he continued. "The opportunities given to my generation were paid for by the hard work and sacrifice of his. Without him, there would be no me."

He then read a statement from President Barack Obama, who called Sutton's death "an enormous loss."

"Percy's passion for justice began at an early age and never wavered," Obama said in a statement, recounting an incident when Sutton was beaten at age 13 for passing out NAACP leaflets in a white neighborhood. "It was an experience that gave him strength and determination to stand up for what he believed in." [10]