Rep. McEachin is the son of an Army veteran and a public-school teacher who was raised in the area that he now proudly represents in Congress. Prior to his service in Congress, Rep. McEachin served as a legislator in both chambers of Virginia’s General Assembly. Throughout that time, he fought to protect our most vulnerable citizens — and to defend the rights of all Virginians. Rep. McEachin is a dedicated public servant who leads efforts that will promote equality, curb gun violence, protect our environment, and preserve access to affordable health care.

Rep. McEachin graduated from American University with a degree in Political Science and from the University of Virginia School of Law. In May of 2008, he received his Master of Divinity from The Samuel DeWitt Proctor School of Theology at Virginia Union University.

Rep. McEachin and his lovely wife Colette are the parents of three adult children. Colette is also an attorney with extensive experience, presently working in the Richmond City Commonwealth’s Attorney’s office.

In 2017 Donald McEachin was a new member of the Congressional Black Caucus.

“Our nation has lost too many transgender Americans to targeted, bigoted violence in our communities,” Kennedy said. “With this resolution recognizing Transgender Day of Remembrance, Congress can commit to confronting these tragedies and protecting all of our citizens.”

In addition to recognizing the Transgender Day of Remembrance, the resolution calls for enhanced federal data collection of anti-trans violence and encourages federal and state governments “to study, respond to, and prevent violence against transgender people.” 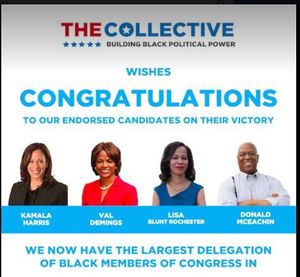 Our delegation held a roundtable with Palestinian youth in Jerusalem.

March 30, 2018 Congressman Jimmy Panetta (CA-20) returned today from a Congressional delegation visit to Afghanistan, Jordan, and Israel. The focus of the trip was on global and regional security and cooperation issues.

In Afghanistan, Congressman Panetta and the delegation traveled to Forward Operating Base (FOB) Lighting which is the temporary home to the Southeast Advisory Security Task Force under the command of Brigadier General David M. Hamilton. The visit to the FOB in the Paktia Provence allowed Congressman Panetta to talk to and thank the service members on the front line who are training and advising Afghan security forces. The delegation then traveled to Kabul and met with General John W. Nicholson, Jr., Commander, Resolute Support Mission and U.S. Forces Afghanistan, who briefed them on the current military strategy and security situation in Afghanistan. The delegation also met with Afghan President Ashraf Ghani and Chief Executive Abdullah Abdullah at the Presidential Palace.

In Jordan, the delegation met with His Royal Highness King Abdullah II Ibn Al Hussein, as well as other senior defense and foreign affairs leadership who shared their insight into the challenges facing Jordan and the region.

In Israel, the delegation discussed U.S.-Israel relations, the prospects for an Israeli-Palestinian peace process, and regional security issues with Israeli President Reuven Rivlin and Prime Minister Benjamin Netanyahu in Jerusalem. The delegation also met with Opposition Leader Isaac Herzog in Tel Aviv. Congressman Panetta and the delegation reiterated American support for a two-state solution and for peace in the region.

In addition to Congressman Panetta, the Members of the delegation included: