Difference between revisions of "Dick Gregory"

Dick Gregory is a comedian/activist.

Circa 1969, Dick Gregory , was listed as a sponsor of the Socialist Workers Party led GI Civil Liberties Defense Committee .[1]

On Sept. 3, 1997, some 1,000 marchers descended on Capitol Hill in Washington, D.C., to present their grievances to Congress. Marches in Washington are a regular occurrence, but this one was out of the ordinary in that it consisted almost wholly of D.C. citizens with a demand from the city's neighborhoods: to stop trampling on home rule in the District.

Speakers at the rally—including the Rev. Jesse Jackson, Dick Gregory, Rep. Maxine Waters (D-Ca) and local activists—decried recent actions by Congress that had robbed the District of the limited measure of home rule it once enjoyed.[4]

The Millions More Movement held an important all-day rally Oct. 15, 2005 on the National Mall that attracted an overwhelmingly African-American crowd numbering more than 1 million, according to organizers. The main demand put forth by the rally organizers and supported by the masses there was “Black power!”

Not one U.S. flag was prominent in the crowd, but the colors of the flag for U.S. Black liberation—red, black and green—could be seen everywhere.

This MMM rally was first announced in 2004 as a commemoration of the 10th anniversary of the Million Man March on Oct. 16, 1995, held at the same site. That event attracted at least 1 million, mainly Black men, and was initiated by the Nation of Islam.

The speeches were focused on a variety of issues: the prison system and the plight of political prisoners—especially Mumia Abu-Jamal, Jamil Abdullah Al-Amin (formerly H. Rap Brown) and Leonard Peltier-police brutality, reparations, voter disenfranchisement, LGBT oppression, immigrant rights, economic and political empowerment, education and health, the role of art and culture in the struggle for social justice, and much more.

The main presentation at this rally was given by the MMM’s national convener and NOI leader, the Hon. Minister Louis Farrakhan.

In a videotaped message played to the crowd, the president of Cuba’s National Assembly, Ricardo Alarcón, expressed the Cuban people’s solidarity with Katrina survivors and all the poor in the U.S. He also spoke about the case of the Cuban 5, who were imprisoned for fighting against terrorism while the U.S. aids and shelters real terrorists like Luis Posada Carriles. [5] 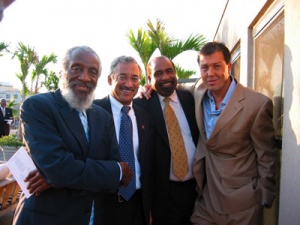 All these founders spoke at the anniversary event. There were speeches too by Attorney General Eric Holder and actor Danny Glover.[7]

Glover and Holder were too young to be part of SNCC, but both emphasized that they would not be where they are today without SNCC and its heroic struggle for African American liberation.

Sudanese President Omar al-Bashir is blocking food and humanitarian aid from reaching half a million people in the Nuba Mountains and Blue Nile regions where they are at grave risk of starvation.

Congresswoman Eleanor Holmes Norton (D-DC) moderated a plenary panel at the Freedom Summer 50th Anniversary Conference at Tougaloo College in Jackson, Mississippi on Saturday, June 28, 2014. The panel, entitled “Our Southern Strategy: Where Do We Go from Here,” focused on the role that the South plays in changing the way that democracy applies to all citizens in the United States. The panel included fellow congressional members: G.K. Butterfield (D-NC), Cedric Richmond (D-LA), and Bennie Thompson (D-MS). Tougaloo College was crucial to the Civil Rights Movement, a safe haven for many activists and a gathering place for the leaders of the Movement. The panel was part of the weeklong Freedom Summer 50th anniversary intergenerational conference. Danny Glover; Julian Bond; Dick Gregory; Sherrilyn Ifill, President of the National Association for the Advancement of Colored People (NAACP) Legal Defense and Educational Fund; and Benjamin Jealous, former President and CEO of the NAACP, were among the participants.[10] 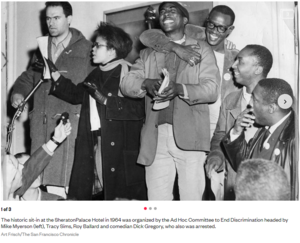