Difference between revisions of "Columbus Democratic Socialists of America" 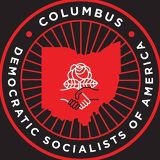 Stay tuned on how you can get involved to elect a champion for Medicare for All, a Green New Deal, and housing justice.

In 2015 Democratic Socialists of Central Ohio members joined forces with Interfaith Worker Justice to create the Central Ohio Workers Center. Members of DSA were key in doing the paperwork to obtain 501(c)(3) status and bringing in a pro bono lawyer. The center’s focus is on know-your-rights outreach to immigrant workers, especially the large Somali community as well as the growing Latino community.[2] 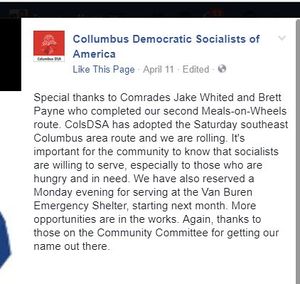 Jake Whited and Brett Payne were Democratic Socialists of Central Ohio members in 2017. 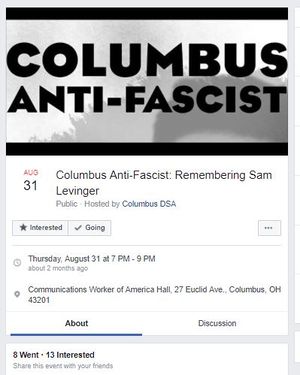 80 years ago, OSU student Sam Levinger was killed in the Spanish Civil War. Anti-fascists like Sam are still fighting and dying for a better world. Join us as we discuss anti-fascism in the 1930s and commemorate his life.

Columbus State Community College (CSCC) hired me in the fall of 1987. Dean David Hockenberry later told me he had thought there should be at least one leftist on the faculty. My dissertation was called “The Idea of Democratic Socialism in America: Eugene V. Debs, Norman Thomas and Michael Harrington.” Believing in “praxis,” I set out to not only teach political science but to engage in social change.

One of the first people I met with was the historian Manning Marable, then-Chair of Black Studies at Ohio State University (OSU). As we lunched at the Faculty Club, I asked him “How do I get to know the Left in Columbus?” He answered, “You’re it, if you volunteer.” He did mention that there was a small alternative newspaper called the Columbus Free Press and their articles were progressive.

The Democratic Socialists of America (DSA) endorsed Jesse Jackson in the Democratic primary for president in 1988. National DSA Co-Chair Barbara Ehrenreich noted Jackson’s line that the U.S. needed “a little class warfare,” and said he sounded like Woody Guthrie on the campaign trail. I volunteered for the Jackson campaign run by State Representative Ray Miller. Despite Senator Michael Dukakis having already secured the nomination, a large black turnout shocked Columbus as Jackson surprisingly won the county.

Out of the Jackson campaign came a handful of people who were concerned with building a radical student group at Columbus State. Suzann Mueller who was a professor in the Humanities Department agreed to help organize a student DSA chapter. In the fall of 1989 we began to publicize Democratic Socialism at CSCC. We held weekly meetings.

In mid-November that year six Jesuit priests, their housekeeper and her daughter were brutally murdered by the fascist regime in El Salvador. So, joined by a couple of DSA members, OSU graduate student George Boas and CSCC student Phil Mente, we grabbed our megaphone and posted and headed to the protest at the federal building at Spring and High Streets in downtown Columbus. We encountered a peaceful, more spiritual group of activists having a vigil. But we were determined to confront the status quo and raised the chants: “George Bush, CIA, how many priests did you kill today?” and to put it in historical perspective, “George Bush, CIA, how many nuns did you rape today?” referring to the tragic incident in 1980.

The next month we called for another action at the federal building, this time we would sleep outside on behalf of the homeless. Despite freezing temperatures, there were half a dozen students and community members who stayed the night. We also got to know the folks from the local Native American Indian Center, who honored us with a drum ceremony and breakfast in the morning. Footage from these events ended up on my public access TV series “From the Democratic Left” that ran from 1990–2002.

One of the new CSCC students who joined was Jennifer Flynn, born with muscular dystrophy. She suggested we hold DSA meetings at the recreation center at her disability housing unit. So, the DSA Youth Chapter from Columbus State essentially created the adult Central Ohio chapter, which took the name DSCO — Democratic Socialists of Central Ohio.

The DSCO chapter’s first major foray into electoral politics was in 1990, to back the mid-20s Tom Erney in his quest to unseat longtime incumbent Republican Congressman Chalmers Wylie (15th District). Erney, former leader of the Young Democrats at Ohio Dominican University, needed no persuasion to go after Wylie’s foreign policy. In an epic commercial, cut for free at the public access TV station, Erney showed the dead bodies of Salvadoran peasants as the voiceover said “Chalmers P. Wylie sent 4.5 billion dollars to the death squad government of El Salvador, which rapes and slaughters nuns and kills priests and peasants. Why, Wylie Why?” and the kicker “Not a Dime for the Death Squad government in El Salvador.” The Vice Presidnet of Time Warner Cable called me as Erney’s campaign manager and begged me to pull the commercial. We refused.

Erney received 41 percent of the vote, more than any other challenger to Wylie. Wylie would retire after his next race citing the Erney race as one factor. Erney and I presented a paper at the 1991 American Political Science Association conference entitled “Waging Guerilla War in the Heartland” analyzing how the campaign with only $17,000 managed to get such a high percentage of the vote.

In 1991 DSA members helped progressive attorney Mary Jo Kilroy win a Columbus School Board seat. I was also appointed to the Franklin County Democratic Party Executive Committee, which nominated me for U.S. Congress in 1992. DSAer George Boas became my campaign manager. The DSA chapter’s goal was simple: to wage the most progressive socialist campaign in Ohio since the Debs campaign of 1912. On my banners, yard signs and T-shirts was the symbol of the Socialist International — a fist and rose. More than a few people thought I was endorsing the first international flower show held in the nation, Ameriflora, it was a good way to start a conversation. The campaign super-soaker sponge promo item, which read “Trickle down won’t work, the rich are sponges” was picked as one of the best political trinkets of 1992.

That same year, most of the DSAers worked in the Jerry Brown campaign in a last desperate bid to derail the neo-con Bill Clinton. With Clinton’s victory, the local Democratic Party moved more and more to the center Right, making it more difficult to espouse open socialism within the Party ranks. The first act by new Franklin County Democratic Party Chair, a converted Republican, was to purge me from the Central Committee.

Many of the DSA members, including George Boas and Jonathan Prince headed over to work on the Columbus Free Press, that I had taken over as co-publisher in 1992. To this day the local DSA and the Free Press share a booth at the annual Community Festival as a tribute and lasting legacy to the early days of DSA in Columbus.[4]

In 1997 Democratic Socialists of Central Ohio officers were;[5]

In Columbus, Ohio, DSA members campaigned for both Obama and congressional candidate Mary Jo Kilroy, who, after a suspenseful count of provisional ballots was declared the winner in December, raising the Democrats’ majority in the House to 257. Another candidate supported by a DSA member but not by the national Democratic party lost in a different district.[7]

"The Other America" forum