Difference between revisions of "Bruce Darling" 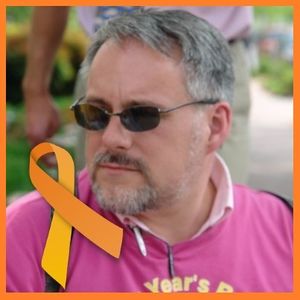 Bruce Darling serves as the CEO for both the Regional Center for Independent Living and the Center for Disability Rights. He is also a member of ADAPT.

On Twitter,[1] Bruce Darling refers to himself as "an ADAPT activist fighting to give people an alternative to institutional placement and the CEO of the Center for Disability Rights."

Bruce Darling is a mentor of Stephanie Woodward.[2] 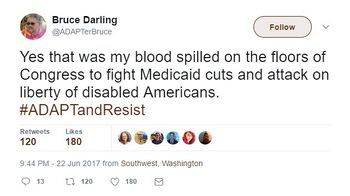 Bruce Darling protested the Republican alternative to Obamacare at Senator Mitch McConnell's office on June 22 2017. The event captured national attention as the ADAPT members refused to leave and were carried out by police.[3],[4]

During the event, Bruce Darling claims his blood was spilled, but did not give details.

In April 2017, Bruce Darling wrote an editorial praising Senator Chuck Schumer for re-introducing ADAPT's Disability Integration Act, which "will establish in Federal Statute the right of people with disabilities to live in the community."[5]

Roberta Wallach was featured along with Bruce Darling in a local news report after staging a week-long sit-in at the headquarters of a nurse's union in upstate New York. From the article:[7]

"A week-long sit-in at the headquarters of a nurse's union in Albany yielded success. That's according to Bruce Darling, head of the Center for Disability Rights and Roberta Wallach, of the Regional Center for Independent Living, who took part in the protest.

"They were among 20 people urging the union to support a state law that would allow non-nurses to administer certain medical services. The goal is to allow more people with disabilities to be able to remain in their homes and not be moved to institutions. The union agreed to the activists' request." 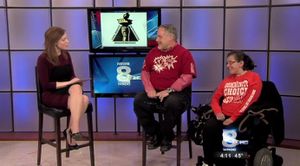 Bruce Darling and Roberta Wallach are featured in a local report

Below is a first-hand account from Bruce Darling about a "direct action" protest in 2002:[8]

"Some of us were able to put into practice what we learned about civil disobedience from Bob and Stephie a few days later when we went to Albany and were part of the ADAPT action there. The action turned out to be very exciting and quite effective. Our message was heard --loud and clear. For the first time we had a large crowd. In past Olmstead actions, in Albany, we never had more than 50 people. This time, because many of the (independent living) people that attended the "Our Homes Not Nursing Homes" Conference joined us, we had about 200 people. And for the first time there were arrests. Eight people were arrested, two of us from NYC - myself and Dina Niedelman (with her little dog Tiny). So the State officials now know how serious we are. We also got lots of media coverage, most of it very positive."

"Mel Tanzman, Nadina LaSpina, T.K. Small and I (Bruce Darling) went to meet with Mr. Wolner. At this point, it seems someone from the state decided to 'show us' that direct action doesn't work. Mr. Wolner didn't show up for the meeting. We waited nearly 45 minutes for him and then returned to the Health Department Tower where we instructed everyone to leave the building.

"We exited the building and lined up in the Concourse. Kathleen Paultler was shouting, 'Grab a sign. Get in Line!' as loud as she could. We began marching to the Capital. It was awesome. The line seemed to go on forever. Looking back you were struck by the large numbers of people.

"We got to the elevators that took us up into the Capital Building and a group of about a dozen people got to the first floor before the elevators were shut down. Four people had made it up to the Governor's floor by elevator when State Troupers shut it down. Nadina LaSpina (NYC), Chris Hilderbrant (Rochester), Spitfire Sabel (Philadelphia, PA), and Ann Kaplow (Rochester). Four more came up by the stairs. Dina Niedelman (NYC) crawled with assistance from Larry Fein (Buffalo). Debbie Bonomo (Rochester) was carried part of the way by Bruce Darling (Rochester) and crawled the rest. In all, eight people got up to the second floor."

"The group was waiting in the Concourse and cheered as each arrestee came out of the State Police Station. I was touched that Bonnie Shoultz was there waiting for us. We walked back to the hotel in single file where we got rooms for the extra people who stayed, including Larry and Todd Vaarwerk from Buffalo. We didn't get a meeting, but we knew we raised community awareness."