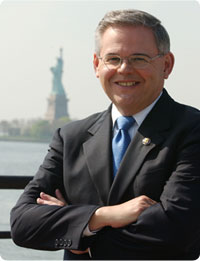 Menendez was sworn in to the Senate on January 18, 2006, having been appointed by New Jersey Governor Jon Corzine to fill the remainder of his term. Later that year, New Jerseyans elected him to serve a full six-year term as United States Senator. He currently serves on the Senate Committees on Finance; Banking, Housing and Urban Affairs; and Foreign Relations. Bob is also the Chairman of the Banking Subcommittee on Housing, Transportation and Community Development; and the Foreign Relations Subcommittee on Western Hemisphere, Peace Corps, and Global Narcotics Affairs.[1]

Bob Menendez was born on New Year’s Day, 1954. He received his B.A. from St. Peter's College in Jersey City and his law degree from Rutgers University. He currently lives in Hoboken and has two children.[2]

Menendez has served as a school board member, a mayor and a state legislator. Since 1993, "he has been standing up for New Jersey families in Washington, where he rose to become the third-highest ranking Democrat in the U.S. House of Representatives."[3]

After September 11, 2001, "Bob earned national recognition for his leadership in reforming the country's intelligence, security, and public health systems and for fighting to establish an independent commission to investigate the terrorist attacks on our country". He was a leader in the fight to successfully implement the 9/11 Commission’s national security recommendations, including the provision to ensure that high-risk states like New Jersey receive their fair share of security funding. He helped author legislative language that will ensure all cargo coming to U.S. ports is scanned. He led the successful drive to fully reopen the Statue of Liberty, and today, he is working to improve the security of our bus, rail and public transit systems.[4]

The Council for a Livable World, founded in 1962 by long-time socialist activist and alleged Soviet agent, Leo Szilard, is a non-profit advocacy organization that seeks to "reduce the danger of nuclear weapons and increase national security", primarily through supporting progressive, congressional candidates who support their policies. The Council supported Bob Menendez in his successful Senate run as candidate for New Jersey.[5]

Campaign to Make Immigration Reform a Top Issue in 2010

On October 13 2010 , immigration activists from around the country gathered to join in a vigil and rally in front of the U.S. Capitol in Washington, DC., where Congressman Luis V. Gutierrez and other elected officials launched a new push for comprehensive immigration reform, building to the opening months of 2010. their banners read “Reform Immigration FOR Families” and “Family Unity Cannot Wait.”

More than 750 people traveled to Washington on buses from up and down the Eastern seaboard and as far away as Texas, Florida, Ohio, Minnesota, and Michigan. They spent Tuesday morning meeting with Congressional offices before being joined by thousands of people from the D.C., Maryland, and Virginia area, who gathered on the grounds of the U.S. Capitol to listen to testimonies from families, veterans, and children who face family disintegration because of immigration laws and deportation.

Religious leaders from a diverse array of faith traditions around the country, some organized through Familias Unidas, added their voices.

At the event Congressman Gutierrez outlined a set of principles for progressive immigration reform that needs to include a rational and humane approach to legalize the undocumented population, to protect workers’ rights, to allocate sufficient visas, to establish a smarter and more humane border enforcement policy, to promote integration of immigrant communities, to include the DREAM Act and AgJOBS bills, to protect rights guaranteed by the Constitution, and to keep families together.

On April 4, 2011, in Trenton New Jersey, the AFL-CIO sponsored rally on the 43rd anniversary of Martin Luther King, Jr.'s assassination. The rally was at the IBEW local hall. The Rutgers AAUP-AFT was a cosponsor. The purpose was to connect the struggles of the labor movement with the struggles for civil rights in the U.S.

Most of the speakers were upbeat "even in these times of crisis". Most saw Wisconsin as an example to be emulated. Most stressed the need to "educate citizens who have been fed a steady diet of lies by rightwing media".

Congressman Rush Holt, Senator Menendez and others made the point clearly that this is about union busting, not budget balancing in any of the states in question. The case of Professor William Cronon was raised as an example of the policy of intimidation which the Republican right has launched--if Cronon, "with his scholarly achievements and academic protections, can be attacked in such a way and university officials forced to turn over emails, then no one is safe in their basic civil liberties and rights".[7]