Difference between revisions of "Anoa Changa" 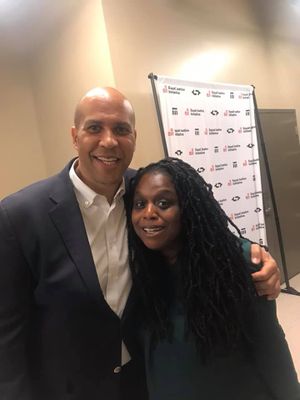 Anoa J. Changa is a member of the Metro Atlanta Democratic Socialists of America. She works for the Stacey Abrams campaign in Georgia.

She is also part-time volunteer staff with Brand New Congress. She is also a contributor to the Benjamin Dixon Show, and hosts of the weekly progressive talk show The Way with Anoa.

She is an attorney in the Greater Atlanta Metropolitan area. She is the proud mother of two. Anoa holds a Master in City and Regional Planning from The Ohio State University as well as a Juris Doctorate from West Virginia University College of Law where she was a W.E.B Dubois fellowship recipient. Aside from her life as an attorney, Anoa is a growing presence in the world of independent progressive media. She is an editor at large for the Progressive Army Blog. [1]

Business and Professional People for the Public Interest

In February, 2010, Anoa Changa (2009), JD West Virginia University College of Law, BA Ohio State University, was Staff Counsel, 2009 Polikoff-Gautreaux Fellow, on the Staff of the Chicago based Business and Professional People for the Public Interest.[2]

In September 2019 Anoa Changa was one of 100 black leaders, many affiliated with Liberation Road who signed A letter from the movement to the movement defending Maurice Moe Mitchell and Nelini Stamp of the Working Families Party for endorsing Elizabeth Warren instead of Bernie Sanders for the Democratic Party presidential nomination.

in 2016 Anoa Changa was a board member of Brand New Congress.

The Metro Atlanta Democratic Socialists of America Afro-Socialists' first event, the Black Power Bowl, drew this great crowd to a get-together at the Phillip Rush Center, Feb. 4. 2018. Attendees included South Fulton Councilman Khalid Kamau; MADSA officer Erin Parks; BLM and Rise Up activist Dawn O'Neal; attorney and Atlanta NAACP Vice-President Gerald Griggs; attorney and political commentator Anoa Changa; and representatives of several other organizations, educators, and small business owners. The group came together for a moment of fellowship and trivia fun. Councilman khalid explained on FB: "#SuperBowl quarterback with a multimillion-dollar #NFL contract, took a knee — not just for a game, but an entire season — and brought a national conversation about police brutality and the #BlackLivesMatter movement into the homes of Americans desperate to avoid it. And when the NFL, in retaliation, stripped him of his career, it sparked an #NFLBoycott that cost the league 2 MILLION viewers. Around the country, #NFLBlackOut parties & protests are creating networks of new activists."[4]

In 2018 Anoa Changa was contact for the Metro Atlanta Democratic Socialists of America Electoral Working Group.[5]

Conveners, and Endorsers (organizations and individuals) of the People's Congress of Resistance as of August 9, 2017 included Anoa Changa, Deputy Director, MPACT.

In March 2019 Anoa Changa was a member of the DSA AfroSocialist and Socialists of Color Caucus.