A Townhall On Anti-Asian Racism

AAPIs for Civic Empowerment Education Fund March 25 at 9:13 AM ·

Tune into this webinar on Anti-Asian Racism, featuring AAPI FORCE-EF executive director Timmy Lu, along with other organizers and scholars!

The People's Collective for Justice and Liberation Presents 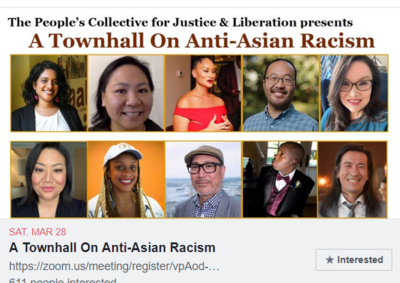 A Townhall On Anti-Asian Racism: Race, Struggle & Solidarity in The Time of A Global Pandemic

We are living in unprecedented times with COVID--19 or the Coronavirus. There has been a rise in anti-Chinese and anti-Asian discrimination and many efforts to combat it during this public health crisis.

Asian American organizers, and other people of color we are in community with, will facilitate a conversation on race, struggle and solidarity in the time of a global pandemic.

In September 2019 Angela Peoples Founder, Black Womxn For was one of 100 black leaders, many affiliated with Liberation Road who signed A letter from the movement to the movement defending Maurice Moe Mitchell and Nelini Stamp of the Working Families Party for endorsing Elizabeth Warren instead of Bernie Sanders for the Democratic Party presidential nomination.