As at Jan. 11, 2010 Alicia Daly served as the Development Director for American Rights at Work.[1] 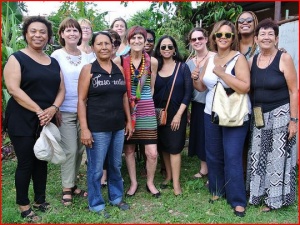 Delegation at Foundation of Nature and Man, June 21, 2011, Heather McGhee, second from right

In June 2011 a delegation organized by the Center for Democracy in the Americas traveled to Havana Cuba. It consisted of Sarah Stephens of CDA, US Congresswomen Barbara Lee, Anna Eshoo, Rosa DeLauro, Betty McCollum, and former Congresswoman Laura Richardson, Bettina Duval, Alicia Daly, Heather McGhee and other, The delegates had several meetings in Havana, including on June 21, when the Congressmembers and Sarah Stephens met with Cuban Foreign Minister Bruno Rodriguez.

The delegates also visited the Foundation of Nature and Man.[2]