Adam Smith is a Democratic member of the United States House of Representatives, representing the 9th district of Washington. He originally ran for the seat in 1996.

Smith was born on June 15, 1965, in Washington, D.C. Smith was adopted as an infant by Ben and Leila Smith and raised in SeaTac, Washington.

Smith graduated from Fordham University in 1987 with a degree in Political Science and from the University Of Washington School Of Law in 1990.

In 1993, Adam married Sara Bickle-Eldridge, a graduate of the University of Washington and Seattle University School of Law. Their daughter, Kendall Charlotte, was born in July 2000, and their son, Jack Evers, was born in June 2003.[1]

In December 2017 Adam Smith was a new member of the Congressional Progressive Caucus.

The Council for a Livable World, founded in 1962 by long-time socialist activist and alleged Soviet agent, Leo Szilard, is a non-profit advocacy organization that seeks to "reduce the danger of nuclear weapons and increase national security", primarily through supporting progressive, congressional candidates who support their policies. The Council supported Brian Baird in his successful House of Representatives run as candidate for Washington.[2]

On Dec. 22, 2009, thirty-three U.S. Representatives wrote to Secretary of State Hillary Clinton, calling on her to request that the Israeli Government end the ban on student travel from Gaza to the West Bank. Adam Smith was one of the signatories of the letter.[3] The entire letter together with a complete list of signatories can be read by clicking here.

On Jan. 27, 2010, U.S. Representatives Keith Ellison and Jim McDermott led 52 other members of Congress in signing a letter addressed to President Barack Obama, calling for him to use diplomatic pressure to resolve the blockade affecting Gaza. Adam Smith was one of the signatories of the letter. [4] The entire letter together with a complete list of signatories can be read by clicking here.

In May 2013, Adam Smith was listed as an associate member the of the Congressional Asian Pacific American Caucus.[5]

On March 14, 2013, Rep. Jared Polis (D-CO) and Rep. Matt Cartwright (D-PA) have introduced the Bringing Reductions to Energy’s Airborne Toxic Health Effect (BREATHE) Act, and the Focused Reduction of Effluence and Stormwater runoff through Hydraulic Environmental Regulation (FRESHER) Act, in order to ensure that the hydraulic fracking industry follows the same rules that other industries do in preserving our natural resources. This legislation is focused on ensuring the safety and the health of the communities where the hydraulic fracturing, or fracking, process is already taking place.

The BREATHE Act would ensure that we close the oil and gas industry’s loophole to the Clean Air Act’s aggregation provision, in addition to adding hydrogen sulfide—a chemical associated with nausea, vomiting, headaches, and irritation of the eyes, nose, and throat—to the Clean Air Act’s federal list of hazardous air pollutants.

On Monday December 16, 2014 Reps. Juan Vargas (D-CA), Mike Honda (D-CA) and Mark Pocan (D-WI) sent a letter to Sec. of State John Kerry – signed by 51 Members of Congress – calling for a public statement of neutrality by the State Department before the first round of El Salvador’s presidential elections on February 2, 2014.

The letter, , highlighted several “important steps” that the current government has taken to “strengthen its democratic system and expand the right to vote to all citizens,” including those living outside of the country, who will be voting by absentee ballot for the first time in February. Since the election of Mauricio Funes, the first President from the Marxist Farabundo Martí National Liberation Front (FMLN) party, the government has increased the number of polling places four-fold to increase accessibility, especially in rural areas.

“We’re glad to see so many Members of Congress expressing respect for the right of the Salvadoran people to determine their own future. That’s an attitude that’s sorely lacking in much of the US’ policy in Central America, especially with regard to economic policy,” said Alexis Stoumbelis, Executive Director for the pro-communist Committee in Solidarity with the People of El Salvador (CISPES), in Washington, DC, which has observed every post-war election in El Salvador, starting in 1994.

JStreet endorsed her again in 2016.

Smith has been an outspoken opponent of settlement construction and a strong supporter of Israel and a two-state solution.[9]

The Alliance for Retired Americans endorsed Adam Smith in 2012.[10]

In the 113th Congress, 50 members of the House of Representatives belonged to the New Democrat Coalition, including:[12] 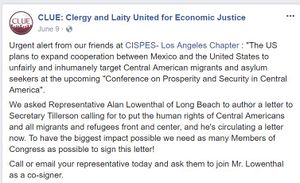 From Clergy and Laity United for Economic Justice;

Urgent alert from our friends at CISPES- Los Angeles Chapter : "The US plans to expand cooperation between Mexico and the United States to unfairly and inhumanely target Central American migrants and asylum seekers at the upcoming "Conference on Prosperity and Security in Central America".

We asked Representative Alan Lowenthal of Long Beach to author a letter to Secretary Tillerson calling for to put the human rights of Central Americans and all migrants and refugees front and center, and he's circulating a letter now. To have the biggest impact possible we need as many Members of Congress as possible to sign this letter!

Call or email your representative today and ask them to join Mr. Lowenthal as a co-signer.

Representative Alan Lowenthal (D-CA) led 37 Members of Congress, including top Democrats from the Armed Forces, Judiciary and Appropriations committees, in sending a letter to Secretary of State Rex Tillerson to raise red flags about “suggestions that the United States deepen security collaboration with Mexico along its southern border [with Guatemala] due to evidence that Mexico’s Southern Border Program has led to wide-spread human rights violations and abuses against migrants and asylum-seekers.”

“I look forward to seeing the crucial work that CAIR continues to do towards preserving the rights and well-being of all Muslim Americans and advocating for others who fall victim to social injustice in the United States.” - Rep. Adam Smith (D-Wash.) (2014). [15]

“In order for our democracy to function effectively, informed citizens must seek to engage civically, and CAIR’s efforts to ensure that American Muslims are able to fully participate in this process are truly remarkable.”

Medicare For All Congressional Caucus founders

Signing up Doggett is important. He chairs the House Ways and Means Health subcommittee, which co-writes medical care legislation on that side of Capitol Hill. NNU will now concentrate on members of his panel and on a recalcitrant Rep. Frank Pallone, D-N.J., who chairs the other key panel for health care bills, the Energy and Commerce Committee.[17]

WASHINGTON DC – Moments ago, the U.S. House of Representatives voted to pass a bipartisan amendment from Reps. Ro Khanna (D-CA) and Matt Gaetz (R-FL) to bar funding for an unauthorized war with Iran. The amendment passed with a final vote count of 251-170. The Khanna-Gaetz amendment was offered as part of the National Defense Authorization Act (NDAA) and builds on the momentum from last month’s Senate vote on the Kaine-Udall amendment, which also would have also blocked the Trump administration from launching an unauthorized war with Iran.

In response to the passage of the Khanna-Gaetz amendment, NIAC Action President Jamal Abdi issued the following statement:

“The House of Representatives should be applauded for its vote today to stop an unauthorized war with Iran before it starts, and we call on the Senate to follow suit. With the passage of the amendment from Representatives Ro Khanna and Matt Gaetz, legislators moved one step closer to pulling the U.S. back from the edge of a war that the American people do not want and that Congress has never authorized. With nearly all of the 2020 presidential candidates calling for the U.S. to return to the Iran nuclear deal, and now with the House passing the Khanna-Gaetz amendment, a bipartisan consensus against the Bolton-Pompeo approach to Iran has clearly emerged.

“The Iranian-American community and the broader American public know that war with Iran would be a disaster. That’s why a majority in the House and Senate now are on the record voting for provisions to rule out an unauthorized war with Iran. It is imperative that legislators ensure that the final defense authorization bill includes the Khanna-Gaetz amendment.

“We applaud Reps. Khanna and Gaetz for their leadership. Without the help of Chairmen Eliot Engel, Adam Smith and Jim McGovern as well as Reps. Anna Eshoo, Seth Moulton, Anthony Brown, Barbara Lee and countless Americans who spoke out against war with Iran, this vote would not have been possible.”[18]