Template:TOCnestleft Marcus G. Raskin is a member[1]of the Board of Trustees of the Institute for Policy Studies. Paths for Reconstruction in the 21st Century. He is the father of Maryland State Senator and activist, Jamin B. Raskin.

Marcus Raskin and another founder of the Institute for Policy Studies, Arthur Waskow, had previously worked for Democratic Congressman Robert Kastenmeier of Wisconsin. In 1961 they co-authored a report for him that recommended unilateral disarmament for the U.S.[2]

Seymour Melman was part of a circle of critical intellectuals with epicenters in various networks. Three were central. First, Melman was part of the Frame of Reference group led by University of Pennsylvania Professor Zellig Harris. Second, he was part of a group of critical scholars at Columbia University including Robert S. Lynd, a leading sociologist in the United States. Third, he was connected to a wide network of national and international scholars and activists concerned with disarmament, economic conversion and economic democracy, e.g. Noam Chomsky, Marcus Raskin, Harley Shaiken, John Ullmann, Lloyd J. Dumas, John Kenneth Galbraith, among many others.

The IPS group identified only two of the Communist Party of the Soviet Union Central Committee officials they met - Georgi A. Arbatov, head of the Institute of the USA and Canada, a "think-tank" that provides research and analysis and also cultivates and develops contacts with Americans at the direction of the KGB and the International Department of the CPSU Central Committee; and Vadim V. Zagladin, first deputy chief of the International Department.

In various U.S. interviews, Borosage has floated such standard Soviet themes as the Soviet Union is satisfied by "rough parity" with the United States; that the United States is restarting the arms race; that the Soviets want to go back to SALT II and get U.S. ratification; that if the United States starts another round in the arms race, it will seriously hurt the Soviet economy and ordinary Soviet citizens-but they'll still go ahead, so competition is futile; and the threat that the modern U.S. weapons proposed for deployment are "very dangerous... and would lead to much more dangerous stages that would make both sides insecure, not more secure."

Borosage took pains to say that the Soviets are "skeptical" of the disarmament movement and "they hadn't expected it. It was much more powerful and widespread than they'd ever imagined."[3]

As at March, 1982, the following served on the Board of Directors of SANE:[4]

The Institute for Southern Studies was incorporated in the state of North Carolina on July 28, 1989. The founding members listed on the incorporation papers:

On December 8, 2010, the Washington Peace Center hosted their 6th Annual Activist Awards Grassroots Gala, at All Souls Church and" celebrate the hard work and successes of DC activists in creating a more just and peaceful world." IPS takes pride that our very own Marc Raskin is one of the recipients of this year's Activist Award! Join us for the activist party of the season!

Lynn Raskin, a Washington D.C. realtor, and her husband, Marcus Raskin, a cofounder of the Institute for Policy Studies, contributed to progressive candidates in several tight congressional races during the 2012 election cycle. They donated to Rep. Tammy Baldwin (D-Wisc.), Rep. John Conyers (D-Mich.), and Elizabeth Warren, the Democrat running for Senate in Massachusetts. They've also given money to Sen. Sherrod Brown (D-Ohio).[8] 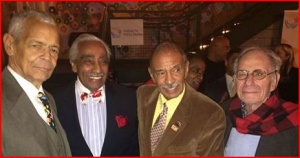 January 7 2015, "John Conyers’ 50 Years of Service", was celebrated at Andy Shallal's Eatonville Restaurant in Washington DC., primarily sponsored by the Institute for Policy Studies. Guests included Robert Creamer, and Irvin Jim of the National Union of Metalworkers of South Africa (a self proclaimed Marxist-Leninist)[9], and members of the Congressional Black Caucus and Congressional Progressive Caucus. Robert Borosage sent a tribute.

Friends and colleagues of Congressman Conyers from all stages of his work for civil rights, peace, human rights attended.[10]