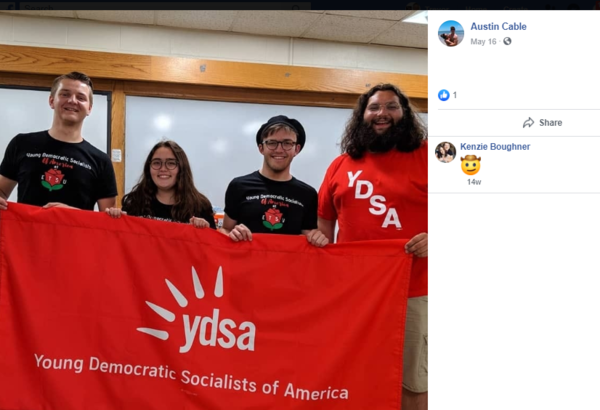 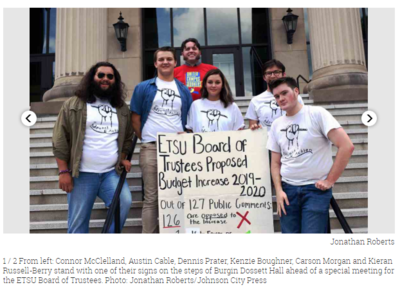 August 2019 Connor McClelland, Austin Cable, Dennis Prater, Kenzie Boughner, Carson Morgan and Kieran Russell-Berry stand with one of their signs on the steps of Burgin Dossett Hall ahead of a special meeting for the ETSU Board of Trustees

Over the past year, East Tennessee State University student activists like Connor McClelland have been integral in intensifying a campuswide campaign to raise adjunct professors’ salaries.

Amid that pressure from campus union and student organizers, the College of Arts and Sciences announced plans last month to raise adjunct wages by $100 for anyone making less than $800 per credit hour.

But activists like McClelland — who helped found the YDSA at East Tennessee State University chapter and has served on the Student Government Association — believe this recent campaign is part of a broader fight for socio-economic justice.

After helping start the YDSA on campus, and consequentially meeting the members of the United Campus Workers Union, I was reinvigorated with a passion I had for some time regarding labor unions and their power to improve the lives of workers. I had seen for some time the UCW work and struggle to get recognition for advocating against the conditions faced by many ETSU employees, and after finally getting involved with them, I wanted to help. I was one of the original core members who had pushed that YDSA as a group should focus on a campaign regarding this issue. We asked everyone if they were on board, and from there, we decided to start advocating for our adjunct faculty as supportive students, and every day the support and traction for Adjunct Action only grew.[1]