Weather Underground Organization was founded in 1969 as an underground, terrorist faction of Students for a Democratic Society.[1]

Weathermen and the Venceremos Brigade

In 1969, those members of SDS who would later become the Weathermen, helped to set up the Venceremos Brigade (VB), to provide cover for sending operatives to Cuba for training by the Cuban intelligence service, the DGI.[3].

October 9, 1977 WASHINGTON, Oct. 8—Cuban espionage agents operating in the United States and Canada supplied limited aid to the Weather Underground, a militant antiwar organization, in the late 1960's and early 1970's, according to a top‐secret report of the Federal Bureau of Investigation.

Some technical assistance was also provided by North Vietnam, the report says, but there was no evidence that the Soviet Union, China or Eastern European nations ever made direct attempts to stir up American dissidents.

The 400‐page report, a copy of which has been obtained by The New York Times, was prepared in August 1976 after the Department of Justice opened a criminal investigation into charges that bureau agents had committed burglaries and carried out illegal mail openings and wiretaps in their attempts to apprehend Weathermen fugitives.

The closely held report—only 10 copies were sent to the bureau director, Clarence M. Kelley—was aimed at establishing that members of the Weather Underground were operating as secret agents of a foreign power and were thus legitimate targets of counterintelligence measures.

The report disclosed, however, that Communist bloc nations had given little tangible support to the American antiwar movement. The report was based upon information from the Central Intelligence Agency, several foreign intelligence services, a wide range of American and foreign police agencies, electronic eavesdropping and reports of several confidential informers.

The following were some of the key points:

The report linked the growing militancy of certain members of the Students for a Democratic Society, which resulted in the so‐called Days of Rage in Chicago in 1969, to North Vietnamese advice the year before to choose youngsters who would battle with the police.

The North Vietnamese, according to S.D.S. literature of the time, had suggested that the antiwar movement needed not just intellectual protesters but also physically rugged recruits.

The report noted that the objective of Cuban intelligence officers in the General Directorate of Intelligence (known by its initials in Spanish as the D.O.T., Cuba's equivalent of the C.I.A.) was not always the same as that of the young members of the Weather Underground.

It said the ultimate objective of the D.G.I.'s participation in setting up the Venceremos Brigades “is the recruitment of individuals who are politically oriented and who someday may obtain a position, elective or appointive, somewhere in the U.S. Government, which would provide the Cuban Government with access to political, economic and military intelligence.”

The report said this conclusion was based on information from former officials of the D.G.I.

The Cuban intelligence officers were described as particularly eager to recruit Americans who had political contacts or who were related to United States government officials.

“A very limited number of VB members have been trained in guerrilla warfare techniques, including use of arms and explosives,” the report said. “This type training is given only to individuals who specifically request it and only then to persons whom the Cubans feel sure are not penetration agents of American intelligence.”

It also reported that contact with the Cubans in the United States was made at the Cuban Mission to the United Nations on East 67th Street in Manhattan. Several top officials stationed at the Embassy in 1969 and 1970 were identified in the report as Cuban espionage agents.

A man who was publicly described as the most effective informer the F.B.I. ever placed among the Weathermen, Larry Grathwohl, reported to the bureau that a code system for communications had been set up by the Cubans, the report said.

“In February 1970, leading WUO member Bill Ayers told fellow underground WUO member Larry Grathwohl that if communication could not be made through these Canadian numbers, an individual should get in touch with the Cuban Embassy in Canada in order to establish contact with other members of the WUO,” the report said.

“To do this an individual should use the code name ‘Delgado’ when referring to himself and the person with whom he desired to make contact,” it said.

In another incident, the report said, four Weathermen who had been in Cuba with the Venceremos Brigade were sent back to the United States through Czechoslovakia. rather than through Canada with other brigade members, to lessen their chances of being arrested by the United States authorities. The four wanted to get back to the United States safely after the explosion of a house in Greenwich Village killed two members of the Weather group, Diana Oughton and Ted Gold, and the Cubans “obliged” them by making the European travel arrangements, the report said.

On the whole, however, the report appeared to be more significant for the paucity of support by Communist bloc nations than for the extent of it. There was no firm evidence that senior Communist intelligence services in the Soviet Union, China or Eastern Europe ever made any direct attempt to incite American dissidents, the report said.

Moreover, the data in the report indicate that the Cubans and the North Vietnamese gave relatively little tangible sup. port, The only cash donation mentioned was $5,000 from an American living in China.

There is no indication in the report that the bureau or other intelligence services ever established that weapons, communications equipment or espionage tools had been fed to the antiwar radicals by the Communists.[4] 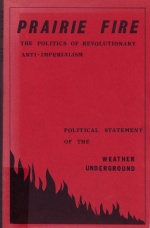 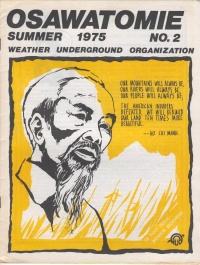 The Weather Underground Organization helped organize and lead the Hard Times Conference with the Prairie Fire Organizing Committee at the University of Illinois Circle Campus in Chicago, from January 30 to February 1, 1976.

After the WUO dissolved in 1977-78 and most of its members turned themselves in to state authorities, there remained a leftover grouplet connected to members of the May 19 Communist Organization (an aboveground group linked to the WU which functioned in the New York area between 1978 and 1985) that was critical of any compromise with the state. It was this small group that, in tandem with elements of the Black Liberation Army, carried out the armed Brinks robbery in 1981, during which two police officers were killed[5]. 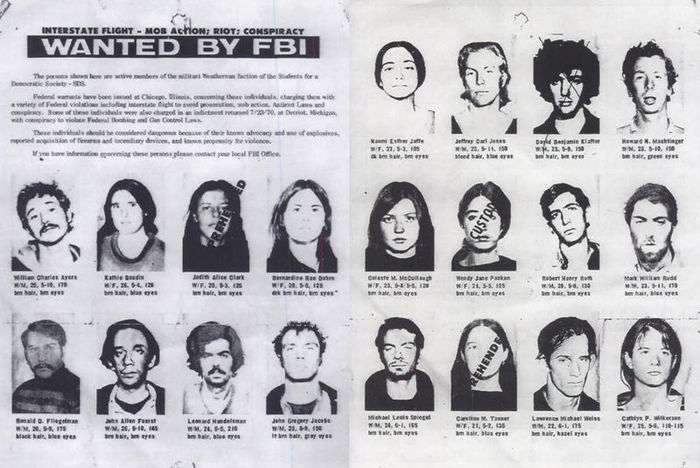