Voces de la Frontera began in 1995 "as the name of a bilingual newspaper in Austin, Texas, subtitled ‘a voce of the voiceless’ and championing immigrant rights and wider social justice issues." It was edited by Christine Neumann-Ortiz. 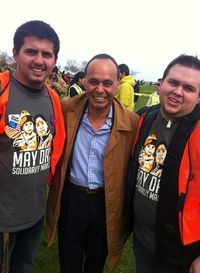 Youth Empowered in the Struggle (YES), is the youth arm of Voces de la Frontera.

Youth Empowered in the Struggle is our student arm and through the chapter model in middle schools, high schools, and colleges and universities we advocate for the rights of students, immigrants and workers."[3]

“For 15 years, Voces de la Frontera has fought to defend immigrant workers and their families,” said Christine Neumann-Ortiz, Executive Director of Voces de la Frontera. “With every organizing tool available, our community has ceaselessly protected itself from the same xenophobia that has now risen to power in the government. We’ve done it through marches, rallies, civil disobedience, lawsuits, building electoral power and more. With Trump’s election, we must now redouble our efforts.

“The immigrant rights movement is resilient, militant and rooted in working class identity. Our movement has broad experience mobilizing strikes, walkouts, boycotts, and economic action when political action has not been possible, as we did in Wisconsin when we defeated anti-immigrant state legislation earlier this year by organizing a Day Without Latinxs and Immigrants. If we see any movement to erode what our movement has won, like DACA, we will do whatever is needed to protect it. We are committed to organizing nationally with our networks and broadening the struggle to include other groups of workers and people who have been threatened by Trump.

“Trump’s message of fear and division unfortuantely (sic) resonated with white blue collar voters, who have suffered economic hardship similar to African Americans and Latinos. In the decimation of union organization, they don’t feel there’s a voice for them. But I do not believe that the majority of those people represent the worst elements of the Trump camaign – the far-right, white supremacist ideology we’ve seen. I think that most Trump voters want the same things that people of color want and need. And the promise they hoped to see in Trump will be betrayed, because he never ran on a platform that supported working people.”[4]