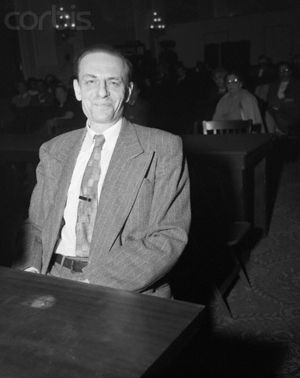 This group acted as an adjunct of the NKVD of the Soviets. The principal function of the group was to obtain information desired by the NKVD particularly with regard to individuals.

Chambers stated that frequently he turned over to Peters sizable sums which he had collected from the Ware group. Chambers has identified John Abt, formerly with the Agricultural Adjustment Administration, later with the Antitrust Division of the Department of Justice, and with the LaFollette Senate Civil Liberties Committee as having been a member of this group. In 1952 Abt was representing the Communist Party USA as co-counsel with Vito Marcantonio before the Subversive Control Board.

Following the death of Harold Ware in an automobile accident, John Abt married Ware's widow, Jessica Smith, who at one time was a secretary in the Soviet Embassy in Washington, D. C. Later, when she became editor of Soviet Russia Today, she was one of the few persons ever to register as a Soviet agent.

Other members who comprised this group were Lee Pressman, formerly with the Agricultural Adjustment Administration, and later general counsel of the Congress of Industrial Organizations, Henry Collins, at one time a member of the Forestry Service of the Department of Agriculture, Nathan Perlow, an economist, and when known to Chambers was connected with the Brookings Institution in Washington, D. C., Charles Kramer, who was also employed by the La Follette committee while Chambers was in contact with him and Alger Hiss, who worked with the Agricultural Adjustment Administration, the State Department, the United Nations Organization, and finally was president of the Carnegie Foundation for International Peace.

The Socialist Scholars Conference 1966, held September 9-11, at the Hotel Commodore, New York, included panels such as:[1]

URPE/Economics Society of the New School Conference on Soviet Union

A "Conference on the Nature of the Soviet Union and Its Role in the World Today" was scheduled for March 17, 1979 in New York City, and was co-sponsored by the Union for Radical Political Economics URPE andthe Economics Society of the New School.

It was divided into both a Morning Session and Afternoon Workshops, to be held at the Washington Irving High School and then the New School for Social Research respectively. The notice appeared in the March 14, 1979 issue of the "Guardian", the U.S. maoist-oriented radical weekly.

Victor Perlo and Ellen Perlo were was listed on the Committee of Sponsors.[3]

The following sent May Day greetings in the People's Weekly World of May 1-7 2004 May Day Supplement page F, from the Northern Westchester Club of the Communist Party USA.