The Electoral Justice Project is part of the Movement for Black Lives and is close to Liberation Road.

In October 2017, Kayla Reed, Jessica Byrd and Rukia Lumumba launched the The Electoral Justice Project (EJP), which is a project by the Movement for Black Lives that aims to fight for and advance the rights of black Americans.[1]

The Electoral Justice Project is led by Jessica Byrd, and Rukia Lumumba.[2] 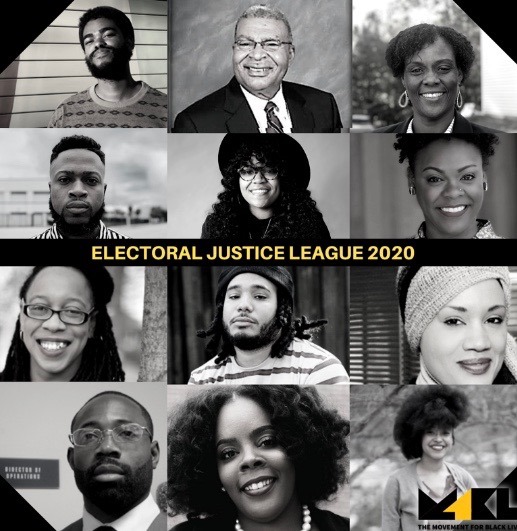 We are so excited to announce the inaugural Electoral Justice League! These 12 fellows come from each region in the US and will work to mobilize our communities to the polls around issues that are important to us. From candidate campaigns to legislative agenda, these fellows are working to usher in the political renaissance of our time. This fellowship will train them to become the strategic political directors of our movement.

The collaboration between the Working Families Party and New Georgia Project in Georgia, the leadership in sectors of Stacey Abrams’ campaign by people out of Movement for Black Lives' The Electoral Justice Project, the fact that the National Domestic Workers Alliance deployed the largest independent field operation in that state – all this energized young voters, re-energized veterans of the Civil Rights Movement of the 1960s and strengthened the emerging Black-Latino alliance, laying the basis for future wins if Stacey Abrams doesn’t pull it out this time..[3]

Republican Cindy Hyde-Smith is facing former congressman and former U.S. agriculture secretary Mike Espy, a black Democrat, in a runoff Nov. 27 2018. She was captured on video praising a supporter by declaring, "If he invited me to a public hanging, I'd be on the front row."

After the video was made public Sunday, Hyde-Smith said her remark Nov. 2 at a campaign event in Tupelo was "an exaggerated expression of regard" for a friend who invited her to speak. "Any attempt to turn this into a negative connotation is ridiculous," she said.

Mike Espy on Monday called the remark "disappointing and harmful."

At a news conference Monday with Republican Gov. Phil Bryant by her side, a stone-faced Hyde-Smith refused to answer questions about the hanging remark.

"I put out a statement yesterday, and that's all I'm going to say about it," she said.

"It really rocked folks," said Democrat Rukia Lumumba, co-director of The Electoral Justice Project and a native Mississippian whose family has deep roots in the state's politics and civil rights activism. "The fact that she has yet to apologize, to recognize the impact of her comments or that people have suffered ... I hope it makes us feel the urgency."[4]