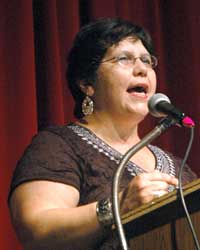 In 1994 Teresa Gutierrez was an initiator of the International Peace for Cuba Appeal, an affiliate of the Workers World Party dominated International Action Center.

ANSWER "Rally Against War and Racism"

April 20, 2002 International A.N.S.W.E.R. Rally Activists representing various groups met on the Ellipse in Washington, DC to voice their support for a Palestinian state, criticize the Bush administration for its support of Prime Minister Sharon’s government in Israel, advocate a stop to racial profiling, and protest the treatment of Muslims at home and abroad.

The event was coordinated by the organization Act Now to Stop War and End Racism. 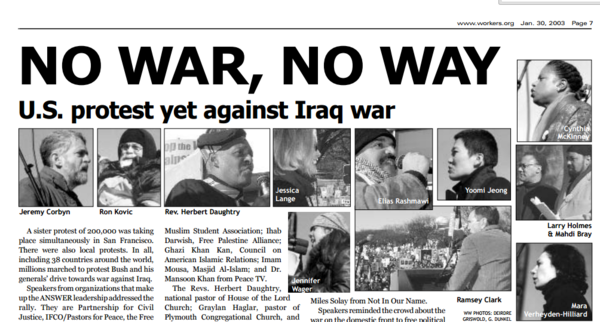 Jan 19, 2003, ANSWER brought together an impressive array of speakers at two rallies—one that began at 11 a.m. in the sprawling National Mall, and a concluding rally at the Washington Shipyard.

Moonanum James, co-chair of United American Indians of New England and a Vietnam-era veteran, opened the rally by connecting the U.S. government’s ongoing racist war against Native peoples with their preparations for a racist war against Iraq.

Former Attorney General Ramsey Clark called on those listening to “impeach Bush.” Blase Bonpane, from the Office of the Americas, traveled from Los Angeles to bring greetings. International representation included Ashraf El-Bayoumi from the Cairo Conference against U.S. Aggression on Iraq and Jeremy Corbyn from the Stop the War Coalition and Abe Tomoko spoke as a representative of the Lower House of the Japanese Parliament.

Struggles around the world against U.S. domination were articulated by Teresa Gutierrez and Sara Flounders from the IAC; Hector Castro, director of education, Central Unitaria de Trabajadores, Colombia; Francisco Rivera, Committee for the Rescue and Development of Vieques; Marie Hilao Enriquez from BAYAN; and Yoomi Jeong from the Korea Truth Commission.

More than 250 U.S. cities took part in the March 20, 2004 Global Day of Action protesting Pentagon wars and occupations. The biggest demonstration was in New York, where 100,000 people marched and rallied.

The event was initiated by the International ANSWER--Act Now to Stop War and End Racism--Coalition, and United for Peace and Justice.

During the ANSWER segment of the rallies, Brian Becker, a co-director of the International Action Center and member of the ANSWER Steering Committee, applauded the courage of the Muslim community in turning out for the march, given the current repression, surveillance and raids.

Teresa Gutierrez of the International Action Center appealed to the crowd to boycott Coca-Cola, implicated in the assassination of workers unionizing its Colombian plants.

Brenda Stokely, chair of New York City Labor Against the War and president of AFSCME District Council 1707, vowed, "We're going to bring down the imperialist powers who think they have the right to slaughter our children!" Larry Holmes of the International Action Center spoke and a taped message from political prisoner Mumia Abu-Jamal urged resistance to racist oppression, police occupation and imperialist oppression.

The national leadership of Workers World Party met in New York on May 23 2004 to select party candidates to run in that year's presidential election.

Representatives from party branches around the country gave their unanimous approval--and a cheering, standing ovation--to a proposal from the Secretariat of the National Committee that the candidates for president and vice president, respectively, be John Parker of Los Angeles and Teresa Gutierrez of New York.

Gutierrez has met with progressive forces in Colombia, Venezuela, Puerto Rico and Mexico. She recently was part of a delegation to the Dominican Republic investigating the use of that country as a training ground for the paramilitaries who attacked Haiti and helped the U.S. depose its elected president, Jean-Bertrand Aristide.

She has visited Cuba many times in solidarity with that besieged but politically strong socialist country, and was a major organizer of the powerful 1992 "Peace for Cuba" rally held at New York's Javits Convention Center that demonstrated the widespread support Cuba enjoyed in that difficult period after the collapse of the USSR.

Teresa Gutierrez first became politically active in the Chicano movement in Texas. She eventually moved to New York to be part of a multinational party that puts the struggle against racism and national oppression at the top of its agenda, as an indispensable part of uniting the working class as a whole in the struggle to end capitalism and build a socialist society. A proud lesbian, she brings consciousness on the need to combat sexist oppression to all her work.[5]

In May 2005 Hands off Venezuela! circulated an internet petition: "from American trade unionists and workers to the appeal to the U.S. government to stay out of Venezuela." Teresa Gutierrez of IAC endorsed the petition.[6]

In 2006 Teresa Gutierrez served on the Secretariat of the Workers World Party[7].

The International Action Center sent a fact-finding delegation to the Philippines Dec. 7 to Dec. 19. 2006. The delegation was comprised of IAC National Co-Director Teresa Gutierrez, and Dianne Mathiowetz of the Atlanta IAC. Also on the trip were two representatives of BAYAN USA and a member of the Malcolm X Grassroots Movement from New York City.[8]

Committee to Celebrate the Life of Luis Miranda Rivas

In 2009 Teresa Gutierrez was a member of the Committee to Celebrate the Life of Luis Miranda Rivas.[9]

poster for the conference