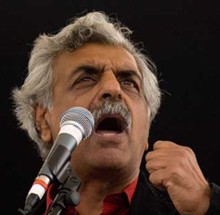 Tariq Ali is a writer, activist and filmmaker. He has written more than two dozen books on world history and politics, and seven novels (translated into over a dozen languages) as well as scripts for the stage and screen. He is an editor of New Left Review and lives in London.

Born in Pakistan he attended Oxford University where he became involved in student politics and the movement against the Vietnam war. He is a critic of neoliberal economics and his book The Clash of Fundamentalisms: Crusades, Jihads and Modernity was a response to 9/11. His latest book is The Obama Syndrome: War Abroad.

European left at the Crossroads 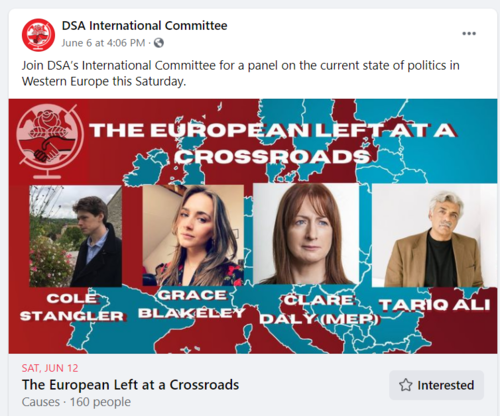 One of the "highlights" of the 2002 Socialist Scholars Conference (April 12-14, NYC) was a lively debate on “Just Wars” with DSAers Michael Walzer of Dissent and Ian Williams of The Nation taking on Steve Shalom of New Politics and Tariq Ali of New Left Review.[2]

ANSWER "Rally Against War and Racism"

April 20, 2002 International A.N.S.W.E.R. Rally Activists representing various groups met on the Ellipse in Washington, DC to voice their support for a Palestinian state, criticize the Bush administration for its support of Prime Minister Sharon’s government in Israel, advocate a stop to racial profiling, and protest the treatment of Muslims at home and abroad.

The event was coordinated by the organization Act Now to Stop War and End Racism.