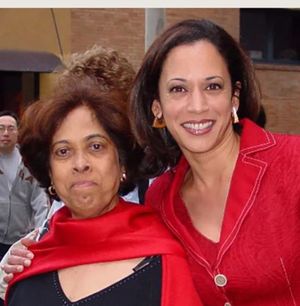 Template:TOCnestleft Shyamala Gopalan died 2009, was the mother of Kamala Harris and Maya Harris and former wife of Donald Harris,

Her father P.V. Gopalan, was an Indian diplomat who was stationed in Lusaka, Zambia in the 1970s.

Her family’s political legacy, though, stretches further back, to India, where her grandfather was active in the fight to gain independence from British colonial rule and her grandmother walked the streets with a bullhorn, telling poor women how to access birth control. “Both of my grandparents impressed upon me their conviction that we each have the capacity and the responsibility to work for a better and more just society,” Harris writes in her 2009 book, Smart on Crime.[1]

“I was born,” Kamala Harris declares, “as a daughter of the civil rights movement.” The year was 1964. Donald Harris, Kamala’s father, had come from Jamaica to pursue a doctorate in economics at the University of California, Berkeley; Shyamala Gopalan, her mother, had come from India to do doctoral work in endocrinology. They met in one of the many small activist study groups then forming off campus, and they kept protesting as Berkeley became ground zero for pretty much every left-wing movement of the 1960s and 1970s.

“My sister, Maya, and I, we joke that we grew up surrounded by a bunch of adults who spent full time marching and shouting for this thing called ‘justice,’” Harris said

Despite its revolutionary reputation, Berkeley wasn’t always a radical place. In the 1950s, the city was ruled by Republicans; its population was only 12 percent black. Over the next decade, that changed dramatically because of people like Harris’s parents.

Her mother was the more natural activist. Born in 1938 to a Tamil Brahmin family in the southern Indian city now called Chennai, Shyamala Gopalan had a front-row seat to the final stages of the Indian independence movement. Her father, Shri P.V. Gopalan, was a member of the progressive Congress Party who eventually became a high-ranking civil servant, battling corruption and acting as an adviser to newly independent nations, including Zambia, where he resettled refugees. Her mother, Rajam Gopalan, was a proto-feminist community organizer who would drive around in her Volkswagen with a bullhorn, helping women from lower castes access birth control and escape abusive husbands.

Shyamala, a star student and nationally recognized singer, graduated from the University of Delhi at 19, then left home for California. Diminutive, dark-skinned and attuned to injustice, she “chose and was welcomed to and enveloped in [Berkeley’s] black community” from “almost the moment she arrived,” Harris writes in her 2019 memoir, “The Truths We Hold.” “It was the foundation of her new American life.”

It was also where she would meet her husband. Unlike Shyamala, Donald Harris didn’t come from a political background. But he too had experienced colonial oppression firsthand — Donald was a young man when Jamaica gained independence from Britain in 1962 — and in his academic work he explored how Marxist economics could both explain and revive struggling Third World economies.[2]

At the start of the 1960s, however, Donald Harris’s search for “alternative approaches” would bear more fruit off campus than on, where fewer than a hundred of Berkeley’s 20,000 students were black. United by a sense of isolation and displacement, a dozen of them began to gather at the Harmon Street house of Mary Lewis, an undergraduate from Detroit. Shyamala and Donald soon joined the group; Lewis eventually became Shyamala’s “closest confidante” and Kamala’s godmother, according to “The Truths We Hold.”

“I was awed by them,” says early member Aubrey LaBrie, whom Kamala eventually came to know as “Uncle Aubrey.” (Lewis was “Aunt Mary.”) “They were intimidatingly smart. They had a determined kind of posture about them.”

Every Sunday, Lewis would host student intellectuals as they “socialized and talked politics incessantly,” writes Donna Jean Murch in “Living for the City: Migration, Education, and the Rise of the Black Panther Party in Oakland, California.” “Fidel Castro and Che Guevara were the heroes of some of us,” Labrie recalls. “We would talk about Black Muslims, the liberation movements going on in Africa, everything.”

They would also read. As both Murch and Harris note in their books, the initial syllabus was full of “classic black history texts” such as W.E.B. Du Bois’s “The Souls of Black Folk,” Carter G. Woodson’s “The Miseducation of the Negro” and Ralph Ellison’s “Invisible Man.” But it was the more contentious readings — the ones Harris doesn’t mention — that proved most influential: E. David Cronon’s “Black Moses: The Story of Marcus Garvey,” which celebrated Garvey’s pioneering emphasis on racial pride and self-determination; Melville J. Herskovits’s “The Myth of the Negro Past,” which championed pan-Africanism in culture and religion; E. Franklin Frazier’s “Black Bourgeoisie,” which criticized a compliant black middle class.

The people close to Kamala Harris’s parents were never Black Panthers. But they did embrace an embryonic version of the philosophy that later came to be known as “Black Power”: black pride, black autonomy and the creation of black political and cultural institutions. According to Labrie, Shyamala Gopalan was the original study group’s only non-black member — the exception that proved the rule. “Her inclusion had a lot to do with the fact that we were really supportive of the Third World liberation movement, so we didn’t really get into that whole debate who was ‘black’ or not,” Labrie says. “But I will admit that a white person wouldn’t have been welcome into that kind of setting. It wasn’t because there was hostility towards them. We just felt more confident and comfortable getting our own thoughts and information together as black people.”[3]

Kamala Harris regularly describes her mother, Shyamala Gopalan, as the most important influence on her life. A breast cancer researcher from India who had a powerful presence despite her five-foot stature, she died of colon cancer in 2009. Donald Harris, Kamala’s father, is a retired leftist Stanford economics professor from Jamaica who studied issues such as income inequality but was less of an impact on her life after the couple divorced when she was a child.

“She has been telling her family’s story her entire political career,” said Jim Stearns, who ran Harris’ first campaign for San Francisco district attorney. “Everybody has to find their own foundation story, and she’s been consistent — she places a lot of value on her roots, and her mom is a huge impact.”

Both of Harris’ parents came to UC Berkeley for graduate school and unexpectedly found themselves staying because of each other.

Gopalan was the precocious daughter of an Indian diplomat and a women’s rights activist in the southeastern state of Tamil Nadu. After graduating from the University of Delhi at age 19, she moved to Berkeley to pursue a doctorate in nutrition and endocrinology, having never set foot in the U.S. before. Donald Harris also excelled at a young age, graduating from the University College of the West Indies in Jamaica before coming to Berkeley.

The two didn’t meet in the classroom but amid the protests that convulsed campus in the 60’s. On Sundays, they gathered with a group of like-minded students to discuss the black writers overlooked by the university curriculum and debate about politics, decolonization and activism.

“I was in awe of them,” said Aubrey LaBrie, 81, an undergraduate in the group who Harris refers to as “Uncle Aubrey” in her recent book. “They were serious students and so articulate, but also really cared” about their activism. 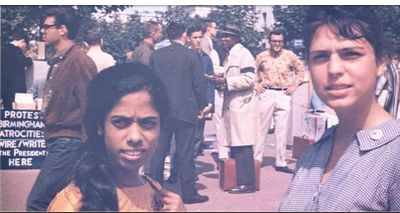 , and college friend Lenore Pomerance at a protest on the UC Berkeley campus]]

The young couple married while still in school, with Gopalan rejecting her family’s tradition of arranged marriage. At age 25, she earned her Ph.D. from Berkeley and gave birth to Kamala in Oakland, working up until the moment her water broke, according to the senator’s memoir.

Harris and Gopalan threw themselves into the civil rights movement, bringing a young Kamala to protests in a stroller. Gopalan met Martin Luther King, Jr. when he spoke at Berkeley in 1967. Kamala also visited far-flung family in India and Jamaica as she grew up, getting her first taste of the broader world.

Her parents separated after Donald Harris took a professorship at the University of Wisconsin-Madison. Gopalan filed for divorce in December 1971, when Kamala was 7, according to court records, and won custody of her daughters in June 1973. “They didn’t fight about money,” Kamala wrote. “The only thing they fought about was who got the books.”

Kamala and her younger sister Maya Harris - now her presidential campaign chair — still visited their father during summers and holidays. But their mother became the central figure in Kamala’s life.

The family lived in an upstairs duplex on Bancroft Way in the Southwest Berkeley flatlands. Kamala took the bus to a wealthier, whiter neighborhood to attend Thousand Oaks Elementary School as part of only the second class desegregated through busing.

Gopalan often took her daughters to her lab, where they helped clean test tubes. When she traveled for work, she sent them to a daycare two doors down from their house, where the walls were covered with posters of African-American leaders and a young Kamala learned about George Washington Carver before President George Washington.

“She knew that her adopted homeland would see Maya and me as black girls, and she was determined to make sure we would grow into confident, proud black women,” Kamala wrote.

Gopalan “was a fun person to be around, but she was very intense too,” remembered Sharon McGaffie, a family friend whose mother ran the daycare. “When I see (Kamala) now, it reminds me so much of her mother — that strength that she’s fighting for something, that she’s never intimidated.”

Even as she excelled in school and her research, she faced discrimination as a woman and an immigrant. At one point in the 70’s, her Berkeley colleague Mina Bissell remembered, Gopalan was rejected for a professorship at the university in favor of a less qualified man, in what Bissell described as a blatantly sexist move. And Kamala wrote about painful memories of her mother being “treated as though she were dumb because of her accent.”

When Kamala was in middle school, her mother moved the family to Montreal to teach and do research at McGill University and studied elsewhere around the U.S. before returning to Lawrence Berkeley Laboratory.

Her research focused on how different forms of breast cancer respond to hormones. Experimenting on mice and human tissue, she helped advance understanding of how some cancers can be controlled by limiting patients’ estrogen.

In her labs over the years, Gopalan also focused on mentoring students of color and wasn’t afraid to call out co-workers to their face if they made insensitive or biased comments — even her boss at the time, Joe Gray, who’s now a professor at Oregon Health and Science University.

“She was about five feet, but she punched way above that,” Gray said with a laugh. “Shyamala was tall as anybody in the room.” 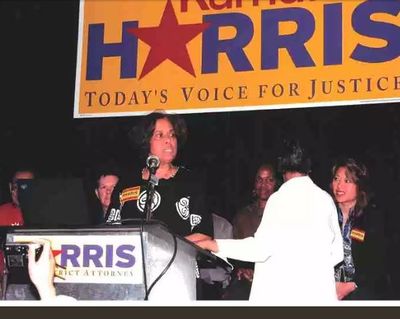 As Kamala got more involved in politics, Gopalan became one of her most devoted volunteers, licking envelopes, knocking on doors and becoming a constant presence at campaign headquarters during her race for San Francisco district attorney.

In 2008, Gopalan broke the news to her daughters that after so many years of studying cancerous cells under a microscope, she had contracted colon cancer herself. She passed away in February 2009.[4]