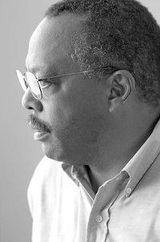 Scott Douglas is an Alabama activist.

Scott Douglas is a native of Nashville, TN and attended the University of Tennessee in Knoxville where he co-founded the University’s Black Student Union in 1967. Residing in Birmingham since 1976, he served under the leadership of Rev. Fred Shuttlesworth and Anne Braden as Executive Director of the Southern Organizing Committee for Racial and Economic Justice from 1984-1989. He was Southern Regional Program Officer for the Partnership for Democracy Foundation from 1989-1992. He is also a former Secretary of the Germania Park Neighborhood Association. After a stint as the first Environmental Justice Grassroots Organizer for the Sierra Club, Douglas became Executive Director of Greater Birmingham Ministries. GBM is a multi-faith, multi-constituency and multi-racial organization that provides emergency services to families in economic crisis while working with congregations and low-income residents to reclaim communities, identify and fill gaps in social service infrastructures and build community confidence in self-governance through inclusive, participatory, transparent, and democratically accountable civic and voter engagement.

Douglas is a former board member of the Birmingham Civil Rights Institute and currently serves on the boards of the Progressive Technology Project, the Equal Justice Initiative of Alabama, Hispanic Interest Coalition of Alabama and the Pushback Network. He has written articles on social and racial justice for Southern Exposure, Howard Law Journal, and the National Newspaper Publishers Association. Scott Douglas is an alumnus of Leadership Birmingham and Leadership Alabama, a founding board member of the Alabama Association of Nonprofits and a 2011 MIT Mel King Community Fellows Program graduate.

Douglas is a member of Saint Paul United Methodist Church (Rev. Marcus Singleton, pastor) where his wife, Lynn, a retired Birmingham teacher, directs the Senior and Homeless Ministries. Scott and Lynn have one adult son, Frederick Douglas, who resides in Nashville.[1]

In 2014, Scott Douglas was listed a a friend on the DuBois Clubs Facebook page.[2]

Heather Gray served on the board of the Southern Organizing Committee for Racial and Economic Justice that Anne Braden co-chaired along with Reverend Fred Shuttlesworth. The organization " was one of the few that provided the opportunity for us to think and act regionally and to make the essential connections of the myriad of issues we faced. From the 1980’s and on the meetings were always filled with a diversity of black, white and eventually Latino activists in the region".

We would sit for hours in New Orleans, Montgomery or Birmingham to strategize on various issues, activities and mistakes we’ve made then and in the past. We would also listen, learn and occasionally join in while the legendary leaders in our midst discussed and analyzed the dynamics of white supremacy, racial politics generally and labor challenges in the South. Anne was never without offering a lengthy epistle about anything until the wee hours of the night along with her ever-present cigarettes! These sessions were often both grueling and enlightening. They were not only a history lesson but also a socialization process into the tactics of southern civil rights activism and Anne understood the importance of this. She wanted to pass this information on to all of us and to keep the momentum going at every conceivable juncture. The meetings were a roll call of southern leaders and activists the likes of Reverend C. T. Vivian, Jack O'Dell, Gwen Patton, Virginia Durr, Reverend Fred Taylor, Reverend James Orange, Connie Tucker, John Zippert, Jackie Ward, Reverend Benjamin Chavis, Charlie Orrock, Ann Romaine, Damu Smith, Jim Dunn, Judy Hand, Scott Douglas, Ron Chisholm, Spiver Gordon, Pat Bryant, Tirso Moreno and countless others.[3]

On November 15-16 1991, 30 dissident members of the National Committee of the Communist Party USA convened a meeting to "sign a statement of events" - most or all signatories were soon to break with the party and were later to form Committees of Correspondence.

In 1991 Scott...Alabama, was one of several hundred Communist Party USA members to sign the a paper "An initiative to Unite and Renew the Party" - most signatories left the Party after the December 1991 conference to found Committees of Correspondence.[6]

Scott Douglas, Greater Birmingham Ministries, was a 2004 Rockwood Leadership Institute National Leading From the Inside Out Alum.[8]

Douglas, with about 20 supporters standing behind him in Kelly Ingram Park, said he is running on a platform of green jobs, green schools, green transportation and green communities[9].

This is Martin Luther King’s birthday celebration, and he famously said that injustice anywhere is a threat to justice everywhere, and HB56 is a threat to me and to all Americans.”

Douglas has been with GBM since 1993, and has recently taken on the fight against Alabama’s tough immigration law, which is known as HB56. Before the interview, Colbert described Douglas as “a community organizer who believes anti-immigration is the civil rights issue of our time.”

During the interview, Douglas described HB56 as a law that “burdens family, breaks up families, forces to split up our families, burdens taxpayers and makes law enforcement take on the extra job of checking out people at traffic stops.” Douglas argued against a patchwork state immigrant law system in which all 50 states have their own anti-immigrant laws, and in favor of a comprehensive federal immigration law “that’s just and fair for everyone.” Douglas also mentioned the argument that HB56 diverts scarce law enforcement resources to immigration enforcement, a view shared by Jefferson County Sheriff Mike Hale and other Alabama law enforcement officials.

At one point, Colbert told Douglas that he is unable to see color (a long running Colbert Report gag), and asked if Douglas is Hispanic.

“I am a proud African-American, a proud Alabamian and a proud United States citizen,” Douglas replied.[10]

As at April 12, 2010, the following served on the Pushback Network Steering Committee:[11]

“Alabama Muslims join their fellow Americans in unequivocally and unconditionally denouncing Sunday's mass shooting at a nightclub in Orlando," said Council on American Islamic Relations Alabama Chapter (CAIR- AL) Executive Director Khaula Hadeed. “Individuals like Muhammad Ali represent true ideals of Islam, whereas the mass murderer Omar Mateen represents the enemies of the faith and indeed, of humanity. Our hearts go out to the victims and their families at this time of great pain, horror, and tragedy."

In a joint statement interfaith and community leaders said, “Much remains to be learned about the horrific shooting at the Pulse night club in Orlando last night, but there are some things that can be said without qualification.

Ashfaq Taufique, President of Birmingham Islamic Society, said, "Like the rest of America, the Muslim community in Birmingham, Alabama woke up today to the devastating news of the horrific attack that happened in Orlando last night. Evil, pure and simple. Our deepest sympathies and prayers are with the innocent victims in Orlando. We stand in complete solidarity with our fellow Alabamians and Americans in the collective fight against hate through its many evil manifestations.”

Diane McNaron, Birmingham Peace Project Chair, said, "Donald Trump's tweets notwithstanding, this heinous act is no different in character from so many other hate crimes, like Dylann Roof's murder of nine church members in Charleston, South Carolina one year ago, Eric Robert Rudolph's bombing of a Birmingham women's clinic and two lesbian night clubs in 1988 and the bombing of a Target rest room in Illinois just three days ago."

Scott Douglas, Executive Director of Greater Birmingham Ministries said, “The tremendous grief and pain brought about by this heinous, homophobic act of intolerance and hate cannot be allowed to become a political profit center whose purpose is to energize even more hate under the banners of homophobia on one hand and Islamaphobia on the other. As law enforcement works to uncover the origins of this crime, we embrace with an abundance of love the families, friends and loved ones of those touched personally by this atrocity.” 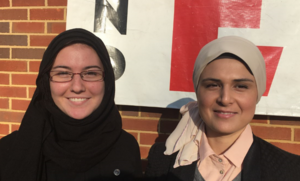 Muslim activists Megan Dubeansky and Khaula Hadeed worked to get out the vote for the Dec. 12, 2017 special election for U.S. Senate

More than 20,000 Muslim voters - about the margin of victory for Jones - turned out and voted almost without exception for Jones, said Khaula Hadeed, executive director of the Council on American-Islamic Relations in Alabama.

"This is a remarkable moment for the Muslim community in Alabama," said Hadeed. "We found hope, empowerment and fellowship amidst a year of derision and discrimination. Thankfully the people spoke and rejected bigotry and racism in favor of solidarity with the most vulnerable among us."

Hadeed joined other minority leaders at Greater Birmingham Ministries on Thursday December 14, who worked to get out the vote in an election that brought together the most marginalized groups, they said.

"It took a whole group of us working together," said Isabel Rubio, executive director of the Hispanic Interest Coalition of Alabama.

"We touched as many people as we could," said Scott Douglas, executive director of Greater Birmingham Ministries, speaking on behalf of the Stand As One Coalition.

"What happened on Tuesday wasn't an accident; it was hard work," said Daniel Schwartz, executive director of Faith in Action Alabama. "When the impossible happens it only whets your imagination for the other things that are impossible."[15] 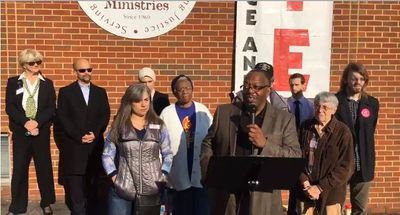