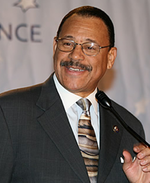 Template:TOCnestleft Sanford D. Bishop, Jr. is a Democratic member of the United States House of Representatives, representing the 2nd district of Georgia.

In the wake of this year’s protests, the members urged the administration to support the Cuban people by suspending U.S. regulations that prevent food, medicine, remittances, and other humanitarian assistance from reaching the Cuban people...

On March 23, 2004, a congressional reception was held in the Dirksen Senate Office Building, Washington, D.C., honoring Korean-born businessman and religious leader, the Rev. Sun Myung Moon. Moon, 85, has been controversial for years. Renowned for officiating at mass weddings, he received an 18-month prison sentence in 1982 for tax fraud and conspiracy to obstruct justice. In a 1997 sermon, he likened homosexuals to "dirty dung-eating dogs."[2] Democrats Sen. Mark Dayton of Minnesota, Rep. Danny K. Davis of Illinois, Rep. Sanford D. Bishop, Jr. of Georgia; and Republicans Rep. Roscoe G. Bartlett of Maryland, Rep. Christopher B. Cannon of Utah, and Rep. Curt Weldon of Pennsylvania – received "Ambassadors for Peace" awards at the ceremony. There were reportedly 81 members of Congress total at the event.[3]

As at September 24, 2010, the Political Action Committee of Veterans of Foreign Wars had endorsed the Sanford Bishop for office.[4]

Sanford Bishop is a member of the Congressional Black Caucus for the 113th Congress:[5]

In Congress, Sanford Bishop is a member of the Blue Dog Coalition.