Sally Avery Bermanzohn, PhD is a professor of political science and department chair at Brooklyn College, City University of New York. She is married to Paul Bermanzohn.

Berhmanzohn wrote Through Survivors' Eyes: From the Sixties to the Greensboro Massacre, and edited the book Violence and Politics: Globalization's Paradox. She is currently writing a book on domestic terrorism and the Ku Klux Klan and is a survivor of the November 3, 1979, tragedy.

Sally Bermanzohn was a member of the Communist Workers Party, as was Paul Bermanzohn.

Writing for the party 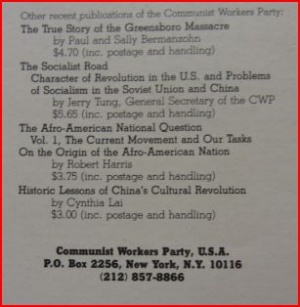 Sally Bermanzohn, an ally of Indigenous rights, is active in the Two Row Wampum Renewal Campaign, and a member of Native Resistance Network. Now retired, she taught social movements and Native American Studies at Brooklyn College, and wrote Through Survivors’ Eyes, and coauthored Violence and Politics: Globalization’s Paradox.[2]