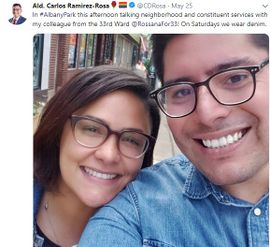 Rossana Rodriguez is a Chicago Alderman and member of Democratic Socialists of America.

An article in July 2019 at the Chicago Sun Times names Rossana Rodriguez as an organizer of an effort to thwart federal Immigration and Customs Enforcement (ICE) agents from removing criminal illegal aliens in Chicago:[1]

"In Chicago’s Albany Park neighborhood Sunday morning, dozens of volunteers seeking to disrupt federal deportation raids fanned out across the Northwest Side neighborhood.

"Armed with cell phone cameras and teamed in pairs, the volunteers set out on foot and on bike to look for Immigration and Customs Enforcement (ICE) raids or signs of an impending raid, such as unmarked law enforcement vehicles staging outside a home.

"Finding a raid or the telltale signs of one was to trigger a mass text message steering volunteers to the site to possibly block the street so ICE vehicles would not be able to leave, or if volunteers arrive early enough, block ICE agents from entering the home of an undocumented immigrant, organizers said. 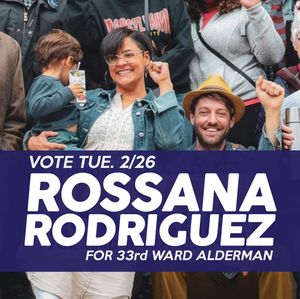 Latin America down and left

Latin America down and left in socialism 2019

Smdh I biked past the 33rd Ward Alderman office (after hours) on the way to Emergency Rally to Save Reproductive Rights the office was empty, show up at the rally and everybody is here... aren't they supposed to be fixing potholes 🤪. Just kidding! Glad to see our alderman and ward staff taking a stand on important issues. — attending Chicago Rally for Reproductive Justice! with Caitlin Marie, Veronica Tirado Mercado, Rossana Rodriguez and Anthony Tamez-Pochel at Daley Center Plaza.

Three aldermanic candidates endorsed and supported by Chicago Democratic Socialists of America won seats on city council April 2 2019 in the Chicago municipal runoff elections. In the 20th Ward, Jeanette Taylor won with 59.64% of the vote and will be taking the seat formerly held by indicted Willie Cochran. Similarly in the 25th ward, Byron Sigcho Lopez, who won with 54.31% of the vote, will be succeeding Danny Solis, formerly the powerful chair of the Zoning committee. In the 40th ward, Andre Vasquez defeated the nine-term incumbent Pat O’Connor with 53.93% of the vote.

A fourth CDSA endorsed candidate, Rossana Rodriguez-Sanchez, is in a tight race with Deb Mell in the 33rd Ward. After bringing Mell to the first runoff in the ward since the 1930s, Rodriguez-Sanchez was up by 64 votes with all precincts reporting. The winner of that race will be determined after absentee ballots are accounted for and a recount is completed.

The new aldermen will join Carlos Ramirez-Rosa, a democratic socialist incumbent in the 35th Ward, and newcomer 1st Ward alderman Daniel La Spata, another CDSA member. Both Ramirez-Rosa and La Spata won their races outright during the first round of voting on February 26. That means that, in a 50 seat city council, at least 10% will be members of Chicago Democratic Socialists of America.

“As democratic socialists, we’re ready to build a Chicago for all of us, not just a wealthy few,” said Lucie Macías, one of two Chicago DSA co-chairs. “Our Chicago for All platform is based on three main planks: Housing for all, Sanctuary for all and Education for all. We’re excited to build a socialist caucus in city hall to carry out this agenda and fight for Chicago’s working class.”

Over the last six months, CDSA endorsed the four aforementioned candidates and supported them with canvasses and other volunteer work. CDSA’s Chicago For All platform represented issues the chapter organized around before the elections, like lifting the ban on rent control in Illinois, stopping the construction of a new $95 million cop academy, and creating a democratically elected school board for Chicago.[2]

The Solidarity Midwest Day School was held at People’s Church in Chicago on Saturday 28 July 2018. The event brought together about 50 people from Detroit, Chicago, Milwaukee.

Ryne Poelker opened the meeting by observing that People’s Church had been targeted by developers and their political allies several years ago, but saved by a successful social justice campaign. T

Rossana Rodriguez won more votes in the February election than Mell, a former Illinois state representative, and is now one of four members of the Democratic Socialists of America (DSA) vying for a city council seat in the 2 April runoff, along with Andre Vasquez, Byron Sigcho Lopez and Jeanette Taylor.

If their success on Tuesday carries over to the April 2019 runoff election, as many as five members of the Democratic Socialists of America could be on the Chicago City Council.

Two won aldermanic seats outright. Three others made the runoffs.

“The oligarchs are shaking in their boots tonight,” Ald. Carlos Ramirez-Rosa (35th) told supporters. “Our continued organizing and movement-building over the last four years is paying dividends. And it appears to be a total transformation of political power at City Hall from the bottom up.”

Rosa is one of the two members of the Chicago Democratic Socialists of America who got the majority vote needed to win without a runoff. The other, Daniel La Spata, upset Ald. Joe Moreno in the Near Northwest Side’s 1st Ward.

Socialist Rosanna Rodriguez-Sanchez will be in April’s runoff against incumbent Ald. Deb Mell (33rd). Rodríguez-Sánchez broke into tears at her election-night party at Chief O’Neils in Avondale after hearing she’d gotten the most votes in a three-way race.

“Chicago had a way of doing politics, and I feel like that died tonight,” Rodríguez-Sánchez said. “I’m very very confident that I’m going to win” in April.

“For the third-biggest city in the country to have a DSA caucus is amazing, and having members around Carlos will only amplify the causes that working-class Chicago — not the rich — wants,” local DSA co-chair Lucie Macias.

Macias said the group supports rent control and having an Chicago school board and opposes plans to build a new police academy in Garfield Park. Nationally, the group backs “Medicare for all.”

The successes of the socialist group’s council candidates set off a raucous celebration at a Chicago watch party at the Logan Square offices of the magazine In These Times, where updates on Tuesday’s vote prompted whoops and swigs from bottles of Malort that were being passed around.