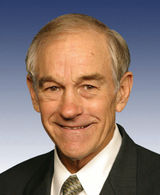 Ron Paul is a former Republican Congressman from Texas.

War Is Making You Poor Act

In combination with fellow House of Representatives members including Ron Paul, Walter B. Jones, Dennis Kucinich, Lynn Woolsey, Barbara Lee, and John Conyers, Rep. Alan Grayson (D-FL) on May 21st 2010, introduced a bill entitled “The War Is Making You Poor Act.” If passed, this legislation would stop funding for the wars against Iraq and Afghanistan and use those revenues to eliminate federal taxes on the the first $35,000 of income, or $70,000 for couples.[3]

In 2010, The Sustainable Defense Task Force was formed in response to a request from Representative Barney Frank (D-MA), working in cooperation with Representative Walter B. Jones (R-NC), Representative Ron Paul (R-TX), and Senator Ron Wyden (D-OR), to explore possible defense budget contributions to deficit reduction efforts that would not compromise the essential security of the United States.