Template:TOCnestleft Robin Peterson is a member of Democratic Socialists of America and Solidarity in Chicago.

What Will We Do about a Trump Coup?

President Donald Trump has refused to commit to a peaceful transfer of power should he lose the 2020 presidential election. His talk and action suggest he might use federal police or the military to interfere with the election process, commandeer polling places and seize ballots, and call on state legislatures to refuse to certify Biden’s victory. Republican governors would likely cooperate and Trump could call upon his supporters in armed rightwing militias.

Join us for a one-day school on some of the key issues facing the left today.

This is the official Facebook group for Chicago DSA and its branches (South Side, Northside, and Oak Park)

In March 2018 Robin Peterson was involved with the Democratic Socialists of America Electoral Committee.

"How to fight back" 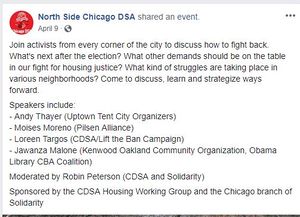 Join activists from every corner of the city to discuss how to fight back. What's next after the election? What other demands should be on the table in our fight for housing justice? What kind of struggles are taking place in various neighborhoods? Come to discuss, learn and strategize ways forward.

Sponsored by the CDSA Housing Working Group and the Chicago branch of Solidarity.