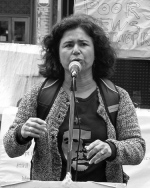 In 2016 College of the Redwoods announced the hiring of Renee Saucedo as the new Director of Student Equity and Success. Saucedo holds a Bachelor of Arts degree in Political Science, and a Juris Doctorate from UC Berkeley. She has taught for many years at San Francisco State University and City College of San Francisco, and has worked as the director of the La Raza Centro Legal-San Francisco Day Labor Program for over ten years. Recently, Saucedo worked as the Director of Social Services for the Wiyot Tribe, and was a community organizer with the True North Organizing Network (PICO).[1]

Saucedo worked on immigrant rights issues, and has been a leader in the immigrant rights movement, since around 1989. She's worked as a staff attorney at La Raza Centro Legal, the SF Day Labor Program, and as the Executive Director of the Northern California Coalition for Immigrant Rights. She helped create the SF Immigrant Rights Commission and served as its first Chair for four years. Also Saucedo helped spearhead almost every immigrant-related legislation or policy in the city, from housing subsidies to non-citizens in Public Housing to having San Francisco be declared an "INS Raid-free Zone." Her main focus has been working with low-income, undocumented workers and have been part of countless workers' rights campaigns.[2] 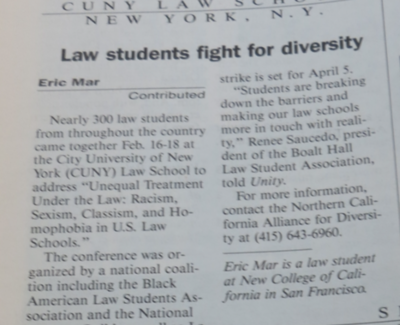 Panelists attacked myths about the economic and social burdens immigrants create in American society. Gov. Pete Wilson was heavily criticized for his treatment of the immigration issue, with Olmo arguing that "desperate" politicians like Wilson "latch onto an issue that will get the people riled up." The panel members agreed that undocumented immigrants contribute more to society than they demand. "Very few people come here looking for welfare. They come here looking for work," Olmo said. Immigrants accept jobs that are unappealing to most Americans, Saucedo said. "[Undocumented! immigrants are taking those jobs which most Americans don't take, because of severity and time constraints."

The panel members also suggested ways to stem the flow of undocumented immigrants. "What I would do is develop the economic policies of the sending countries," Olmo said. Taylor proposed a lottery system which removes racist quotas, or a skills test to attract educated immigrants. Many students in attendance agreed with the panel members. "Immigration is what has made this country what it is — both good and bad," said senior Victor Madrigal. "There is no reason why we should have borders to deny people the opportunity to live here," he said. "The problem is in people's perceptions of immigration and using immigrants as a scapegoat to other problems," said junior Luz Herrera. <ref<[The Stanford Daily, Volume 204, Issue 48, 3 December 1993]</ref>

Chanting "Free Wen Ho Lee!" more than 150 people rallied in front of the San Francisco Federal Building, June 8, 2000 for a National Day of Action to protest the government's persecution of Dr. Wen Ho Lee. Dr. Lee was an employee of Los Alamos National Laboratory, which designs and builds nuclear weapons. He was jailed and charged with providing an unnamed foreign power with information on atomic weapons.

The San Francisco protest was one of many demonstrations, teach-ins, and press conferences held across the country organized by the Coalition Against Racial and Ethnic Scapegoating (CARES). CARES charges that Dr. Lee was singled out because of his Chinese ancestry, and was made a scapegoat for poor security at the weapons lab.

Los Alamos Laboratory has security problems, which have continued after the arrest of Dr. Lee. The former head of security at Los Alamos stated that Lee was targeted because he was Chinese. At the rally in San Francisco, author Helen Zia angrily told the government, "Shame, shame, shame," referring to the fact former CIA head, John Deutch also mishandled data, but he has not been charged with a crime or jailed.

Other speakers at the rally explained how the persecution of Wen Ho Lee reflects the growing tensions between the United States and China, and likened his persecution based on nationality to police harassment of African Americans and Latinos. Lillian Galedo of Filipinos for Affirmative Action stated the case against Wen Ho Lee was influenced by "cold warriors trying to maintain the 'Chinese threat.'"

Renee Saucedo, of the Centro Legal La Raza, said that Latinos can relate to Wen Ho Lee because, "We are seen as 'illegals' and suffer from racial profiling by the police." She also praised the coalition of Latinos, African Americans, and Asian Americans who came together in a statewide effort to end the common police practice of stopping African American and Latino drivers for no apparent reason, "Driving while black or brown."

As each speaker finished, they shackled themselves together with handcuffs and chains to protest Wen Ho Lee's treatment. Dr. Lee's daughter, Alberta Lee, told the San Francisco rally how her elderly father is kept in solitary confinement, with his hands chained to his waist whenever he leaves his cell.

The discriminatory and inhumane treatment of Dr. Lee has led a number of prominent Asian Americans such as former chancellor Chang-Lin Tien of the University of California, Berkeley, and former California congressperson Norman Mineta to speak out on his behalf. [3]

Symposium on Race and Racism at SFSU

In 2004, running against an incumbent with a 10-year history on the Board of Supervisors Green Party USA member Renee Saucedo hopes to replace Tom Ammiano and bring a more aggressive approach to social justice with her to City Hall. The four pillars of her community-based campaign are neighborhood health and safety, jobs, housing and youth.

Although Saucedo agrees with a number of Ammiano's past decisions, she says its time for new energy and new interests to represent District 9, which includes the Mission and Bernal Heights.

"I do believe that term limits are healthy, particularly in local politics. It avoids political careerism," Saucedo said. "Out of principle, [Ammiano] should allow new grassroots leadership to take the baton."[6]

For May Day and Beyond: White People Step up for Immigrant Rights!

We, white people who believe in justice and ending racism, have a responsibility and a historic opportunity to stand with immigrant communities and unite behind their demands. As white people, most of us with U.S. citizenship, we call out to our white communities to take to the streets for immigrant rights. We must demonstrate that the rightwing racists, from the Minutemen to in the Congress, do not represent us!

If you agree with these principles, we invite you to sign this letter and make your signature a commitment to putting them into action in your work and life.

Catalyst Project and the Heads Up Collective

Join us for a dialogue on current issues facing the progressive movements and their allies in our region. The Progressive Forum seeks to bring together scholars, students, social justice and union activists, and policy makers to nurture a new kind of conversation from within the campus and the social movements.