Regina Romero is mayor of Tucson Arizona. Her husband Ruben Reyes has been a chief staff for Rep. Raul Grijalva.

In 2019 Regina Romero stood for Mayor of Tucson.

You are not alone” was the message from Tucson Mayor elect Regina Romero to striking copper miners in Southern Arizona. She was addressing rallying strikers and supporters who came to picket their bosses at ASARCO’s corporate office lair on Tucson’s east side on Nov. 17 2019. Romero called out the company for refusing to bargain with the copper unions in good faith. She condemned ASARCO for offering only takeaways to workers, most of whom who have gone ten years without a raise, and wanting to more than double their workers’ out of pocket healthcare expenses. She also pointed out that German Larrea, CEO of Grupo Mexico, the multinational that owns ASARCO, is worth $13 billion, but won’t invest in his employees.

United Steelworkers Arizona Sub-district Director, Manny Armenta, thanked the community for their support and explained that after five weeks of refusing to sit down with the union, ASARCO finally met with the unions but offered only the same old nothing. Armenta urged the striking unions and supporters to maintain their unity. Armenta also introduced a railroad switchman visiting from Seattle who brought a check for $350 that his union collected for the strike fund as “a stand against corporate tyranny.”

Romero, who was elected earlier this month, will become Tucson’s first woman mayor, and the Tucson’s first Mexican American since 1876. Joining her at the rally were State Senator Victoria Steele, and representatives of County Supervisor Richard Elias and Congresswoman Ann Kirkpatrick, as well many trade unionists and community supporters.

About 2,000 union copper workers, represented by Steelworkers, Teamsters, Electricians, Operating engineers and four other unions walked off the job October 13 at three open pit copper mines in Arizona, a refinery in Amarillo Texas, and a smelter in Hayden, Arizona. The strike has forced ASARCO to cease operations at the smelter and refinery, but is still operating the three mines with scab labor.

The Mission and the Silver Bell mines are near Tucson so striking miners have been joined by union and community supporters, especially at the time of shift changes. The Pima Area Labor Federation and it’s member locals have been particularly active in support of the strikers, as is the local Jobs with Justice coalition, but it’s clear that the struggle needs to be broadened. ASARCO/Grupo Mexico is a corporate predator that has viciously and mercilessly attacked workers and their unions in Mexico and South America.[1] 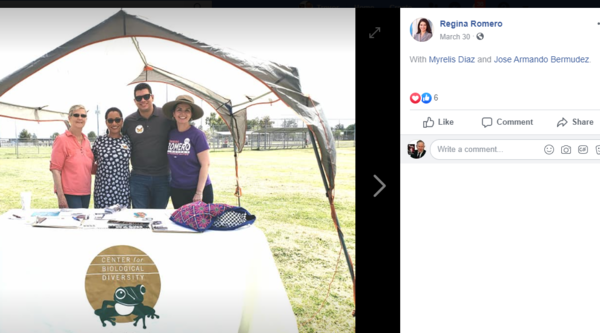 Regina Romero is very close to the Communist Party USA. 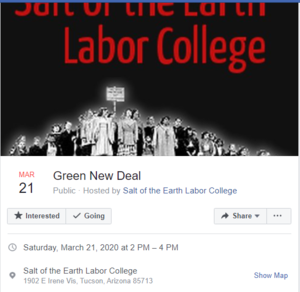 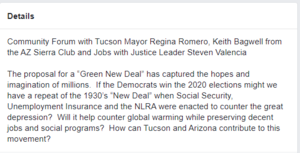 The proposal for a “Green New Deal” has captured the hopes and imagination of millions. If the Democrats win the 2020 elections might we have a repeat of the 1930’s “New Deal” when Social Security, Unemployment Insurance and the NLRA were enacted to counter the great depression? Will it help counter global warming while preserving decent jobs and social programs? How can Tucson and Arizona contribute to this movement?

Voters in Tucson took the first step toward making history on Aug. 27 (2019) when City Councilwoman Regina Romero won the Democratic nomination for mayor.

Romero is expected to easily defeat independent Ed Ackerley and Green Party candidate Mike Cease in November to become Tucson’s first woman mayor, and also the first Mexican-American mayor since 1876 when it was a very small and overwhelmingly Mexican-populated town in the Arizona Territory. Arizona became a state in 1912.

In the November general elections, voters will also be voting on an initiative to make Tucson a Sanctuary City for refugees.

Romero took just over 50% of the vote in a heated race against two well-financed candidates, former state Sen. Steve Farley and newcomer Randi Dorman, who was backed by the business establishment and the local newspaper. Tucson boasts that it was the first place in the country to adopt publicly-financed election campaigns, and Romero was the only one of the three mayoral candidates to opt for public financing.

Her two rivals had expected to outspend her with special interest contributions, but this tactic failed to overcome the massive support Romero had in the community and from grassroots organizations. She enjoyed strong support from labor, especially SEIU and UFCW, the Sierra Club, League of Conservation Voters, Planned Parenthood, and other progressive groups.

Romero also benefitted from her longtime alliance with progressive Congressman Raul Grijalva’s and County Supervisor Richard Elias’s independent organized campaigning structures built over the last three decades. The election was by mail ballot only, but the door-to-door canvassing had to take place during the simmering Arizona summer with July and August temperatures seldom under 100 degrees.

Democrats outnumber Republicans by two to one in Tucson. Only registered Democrats and independents can vote in the primary, but the “mail ballot only” system made it difficult for independents to participate. Independents received a letter offering them the opportunity to choose a party primary, but the letter arrived a whole month before the date candidates had to file for office, so many voters put the letter aside until they knew who the candidates would be. Of course, when one puts something like this aside it often gets misplaced and never used, so while it was possible to request a ballot by phone, thousands of independent voters, who usually vote, missed this election.

The absence of Republican candidates for mayor also kept some voters away. In addition to a new mayor, Tucsonans will also be voting for three City Council seats. Tucson has an unusual system where council candidates are nominated in ward-only primaries but then elected by all voters citywide in the general election. Republicans will have candidates in only two wards, while the Green Party is fielding candidates for mayor and all three council seats. The City Council is expected to remain all Democratic.

Too often working-class unity is undermined by this shortcoming, resulting in political activists who are too hung up on party labels and take the position of supporting only Democratic candidates, or never supporting “capitalist” Democratic or Republican candidates. Working people, like our class enemy, need to see electoral contests as an important arena of class struggle, take the people’s side strategically as well as ideologically, and not be obsessed with labels.[2] 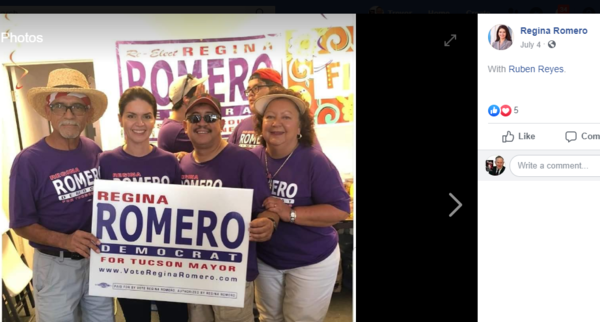 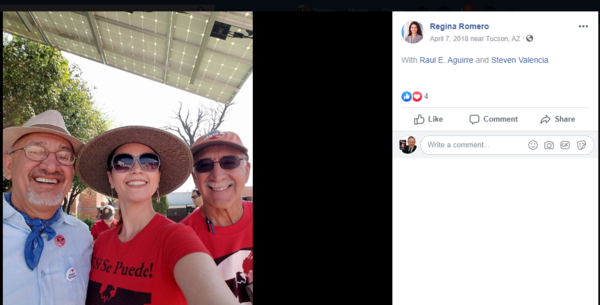 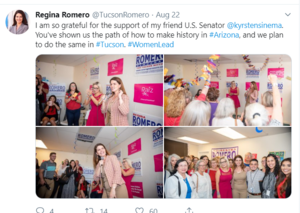 I am so grateful for the support of my friend U.S. Senator @kyrstensinema . You've shown us the path of how to make history in #Arizona, and we plan to do the same in #Tucson. #WomenLead

Regina Romero endorsed both Raul Grijalva for Congress and Kyrsten Sinema for US Senate in 2018. 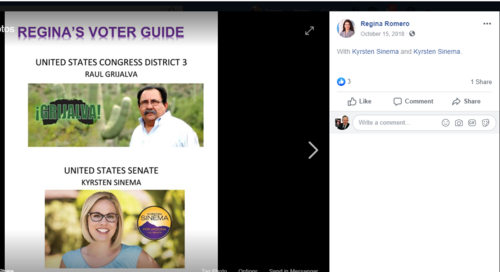 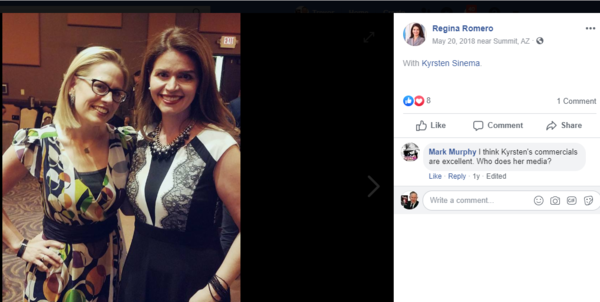 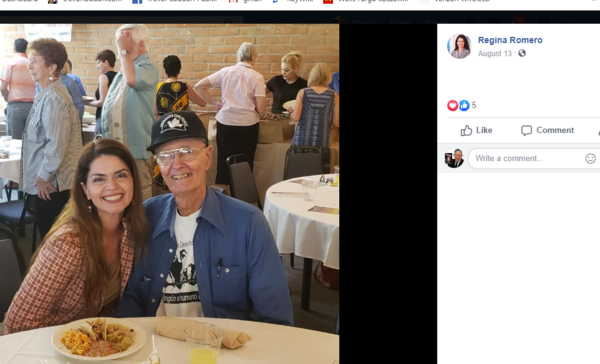 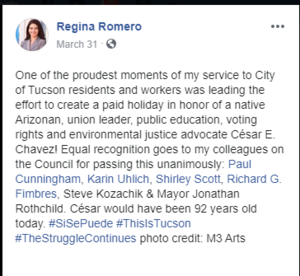 One of the proudest moments of my service to City of Tucson residents and workers was leading the effort to create a paid holiday in honor of a native Arizonan, union leader, public education, voting rights and environmental justice advocate Cesar Chavez! Equal recognition goes to my colleagues on the Council for passing this unanimously: Paul Cunningham, Karin Uhlich, Shirley Scott, Richard Fimbres, Steve Kozachik & Mayor Jonathan Rothchild. 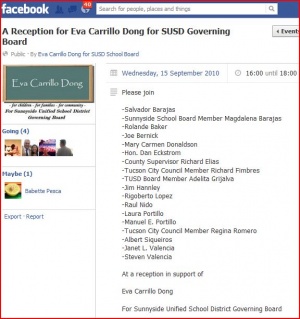 The women of our Local Progress board! — with Meghan Sahli-Wells, Helen Gym and Megan Ellyia Green. 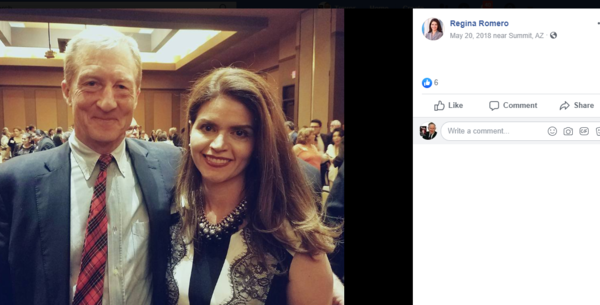 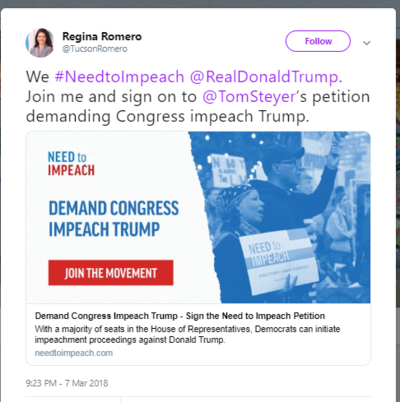 “I’m used to push(ing) back,” Romero said Thursday. “I’m used to people using my gender and my ethnicity against me … I am not alone. There are people throughout this country and in this community that believe that Trump is unfit to be the president of this country.”

“We #NeedtoImpeach @RealDonaldTrump,” Romero reiterated on Twitter. “Join me and sign on to @TomSteyer’s petition demanding Congress impeach Trump.”

Tom Steyer, the Democratic megadonor to whom Romero refers in her tweet, is spearheading the party’s efforts to impeach Trump. Steyer was the single largest individual donor during the 2016 election cycle and announced in November 2017 that he would be placing a $20 million ad campaign behind his idea.

He also is behind a new ballot proposal that seeks to require Arizona’s public utilities to obtain half of their generation from renewable sources by 2030. The proposal has been dismissed by a professor at Arizona State University as “a scam” and by the Arizonans for Affordable Electricity coalition as a “feel-good measure” that will put Arizona’s electricity grid at risk.[4]

Steyer is funding a controversial ballot proposal that would force Arizona’s utilities to obtain half of their energy from renewable sources by the year 2030. Critics — including elected officials, business organizations, and many others — contend that such a mandate would lead to higher utility bills for families across the state.

The Democratic mega-donor visited the Desert Diamond Casino in Tucson Saturday for the “7th Annual Udall Dinner & Spirit of Arizona Awards” hosted by the Pima County Democratic Party. Steyer is listed as the “Keynote Speaker” on an official invitation and was expected to speak about his ongoing ballot campaign.

No other Democrats were named on the official event invitation, but various social media posts indicate that Arizona Democratic Party chairwoman Felecia Rotellini and Democratic Congresswoman Kyrsten Sinema were in attendance.

In addition to his green-energy proposal, Steyer has spent millions of dollars trying to impeach President Donald Trump. The campaign has received some support from Democrats in Arizona — including Tucson City Council member Regina Romero — but has otherwise been met with skepticism from national Democrats who fear it could increase Republican turnout in November.[5]