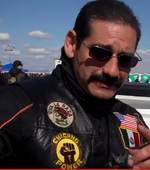 Ray Siqueiros is a Tucson Arizona activist. In 2005 he was a 40 year old, father of three, and social studies teacher at Sunnyside High School, where he is involved in the MEChA club.[1]

He is active in the American Federation of Teachers, and is married to Sandra Siqueiros.

I am so glad I got to meet George 27 years ago. I had just joined the Party and moved to New York where I was able to attend many national Party events. I especially enjoyed the National Labor Committee events, where I could really fathom the idea of Industrial Concentration by rubbing shoulders with the likes of George Edwards, Hosea Hudson, Gus Hall, Henry Winston, and many other greats too long to list here. These heroes of our working class USA modeled confidence, humility, approachability, and plain honesty! I hope to continue in any way-great or small-their stunning example. [2]

While the national fervor over illegal immigration polarizes the country, the offspring of the debated are taking to the streets.

And so it was in Tucson March 29, 2006, when hundreds of students walked out of their high schools with a message of “hear me” or at least “see me.”

“They wanted to keep us silent,” said 15-year-old David Encinas, who scaled the 8-foot fence at Cholla High School after school officials locked the gates, hoping to avert the walkout. “We pushed through because we have a voice and we just wanted to be heard.” 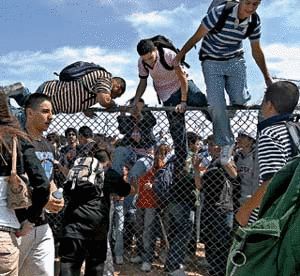 Students from Pueblo High School scale a fence after school officials locked the gates, attempting to avert the walkout 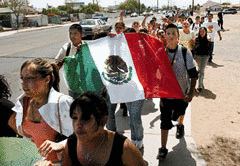 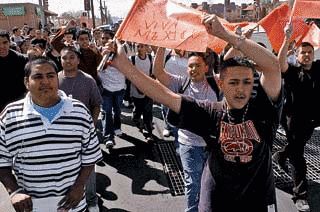 More than 300 students from Cholla and Pueblo high schools marched toward Border Patrol headquarters at 1970 W. Ajo Way and then downtown in a seven-mile march that began during the noon hour.

At Sunnyside High School, administrators and student organizers were able to shepherd about 600 students into the auditorium to discuss the purpose of the protest and march.

Students at Cholla and Pueblo coordinated their march within a matter of minutes during lunch by calling and text messaging each other on their cell phones, they said.

Sunnyside Principal Raul Nido said he wanted to work with the students, not contain them.

“If you know what the cause is and you’re passionate about it, then tell me why,” Nido said. “If you don’t know what you’re doing then you’re being led. This is a very hot issue.”

Students said they were appreciative.

“I expected them to try and stop us, but instead they’re encouraging us,” said Alex Gonzalez, 17, a junior and Sunnyside student body vice president. “They understand where we’re coming from.”

“This is our chance to show that Sunnyside is not a bunch of gangbangers, that we really care about what’s going on in this world,” David Caiz, a 19-year-old senior, told the protesters. “We’re all students of this world and we have to take care of each other. If I’m going to get arrested for giving water to my people, then I’m going to jail.”

Administrators at Tucson High Magnet School kept students on campus and talked about the protests.

“We feel that we should be organized if something like that should happen,” said Gabriela Robles, a 17-year-old junior. “I think we can reach out to the community in different ways instead of having to do it that way. I think that some people took advantage of it and just walked out to walk out, without really knowing what was going on.”

No schools were placed on lockdown, but Pueblo Magnet High School did lock its gates in an unsuccessful effort to keep students from leaving, she said. Students at Cholla also reported that the gates were locked.

As the Cholla and Pueblo students made their way down Ajo Way, some drivers honked their horns and shouted in support, occasionally slowing down to high-five the students. A handful of students carried Mexican flags.

The Tucson students joined a growing wave of protests of U.S. House Bill 4437, which would make felons of the country’s estimated 12 million illegal immigrants.

Most students could not name the piece of legislation they were protesting, but they knew what it would do.

“They want to imprison immigrants,” said Pueblo senior Victor Lopez, 17. “They’re the backbone of this county. They take care of the elderly. They pick the crops we eat.”

“We shouldn’t be arrested just for helping somebody,” said 16-year-old Adreina Gutierrez, referring to a provision in the bill that would criminalize churches and other groups that provide aid to anybody in the country illegally.

Jessica Vazquez, an 18-year-old junior from Pueblo, said she was marching for her aunts and uncles, who have been in the United States for years but have not been able to get green cards.

“I’m scared I would lose them all,” she said. “They should give them a pass to work. That’s what President Bush wants.”

The Sunnyside students circled the school’s neighborhood before returning to campus.

“I did expect (a protest), but I didn’t expect it to come from kids,” he said. “That makes me feel proud.”

One student in the Cholla-Pueblo march nearly fainted from dehydration. Another sprained her ankle. Two more were arrested for obstructing traffic. A spokesperson for Tucson police said they were later released to their parents.

“This is amazing,” beamed Christina Ramirez, a 17-year-old senior from Pueblo High. “I feel like we’re actually going to make something happen. It’s the first time in my life I feel like I’m making an impact.”

Officials from Tucson Unified School District sent letters home to parents stating that they respect the students’ right to demonstrate, but do not approve of them leaving campus.

TUSD Superintendent Roger Pfeuffer said that in the next couple of days, he will provide forums in the schools, classroom discussions, letter-writing campaigns, petition activities – and whatever else the students want to do.

Tucson police Sgt. Mark Robinson said there were minor traffic snarls because of the protest. During the protest,TPD went on a citywide alert and only priority calls were taken as officers across the city were redirected to monitor the demonstrations.

Ray Siqueiros, of Sí Se Puede, a group that organizes the annual Cesar Chavez rally, was pleased at the peaceful nature of the day and optimistic the community will rally behind the students.

“Leave it to our kids to show us how it’s done,” he said. “It’s in tradition with Cesar Chavez. His spirit is alive and well in Tucson. The community, the parents and the school should be very proud of the students.”[3]

Over 200 people turned out on Sept. 27 2001 for an interfaith service here honoring Cesar Chavez. Participants pointed out that the Sept. 11 tragedy highlights the need to learn from Cesar Chavez, who "struggled for justice and dignity while practicing nonviolence".

A march was held the next day, which was addressed by Pima County Supervisor Raul Grijalva. Two of the five supervisors, Grijalva and Dan Eckstrom are strong supporters of the campaign.[4]

Over 650 marchers, many carrying signs that read, “Peace is Patriotic,” celebrated the Third Annual Cesar Chavez Day March and Rally for Peace.

University of Arizona Women’s Studies professor, Raquel Rubio Goldsmith, opened the day’s festivities which brought together a "historic coalition for peace and justice". Endorsed by 48 community groups and by Congressman Raul Grijalva , the event provided a "spirited challenge not only to war, but to all attacks on people of color and working families everywhere".

Julian Kunnie, Director of Africana Studies at the University of Arizona, declared, “We are going to resist this war. We have mobilized a diverse group of organizations—labor, peace, women’s, civil rights, Chicano groups—to celebrate Cesar Chavez and to send a very strong message against this war! We are not going to take this sitting down!”

Cami Juarez, who grew up in a family of farmworkers, was one of many in the crowd who had met Chavez, whose mother was a Tucson native. Juarez noted that, “A lot of people involved in the peace movement are workers. They understand the needs of the disenfranchised.”

Juarez reported his experience the previous day when he and rally organizer, Ray Siqueiros, spoke at an assembly at Cesar Chavez Middle School. “I asked the students if they knew what was going on in Iraq. They did. I asked them if they knew what was going on in North Korea. They did. Then, I asked them why we were going to war with Iraq, but not North Korea. The kids said, ‘It’s the oil! There’s no oil involved in North Korea.’ These are disenfranchised youth. They know about oppression and they know about greed. They know what’s going on.”

Rep. Raul Grijalva, whose 7th Congressional District includes Yuma, Chavez’s birthplace, told the rally, “these are troubling and saddening times.” He called on the crowd to exercise their responsibility and rights as Americans to change the country by voicing their opinions in a non-violent way.[5] 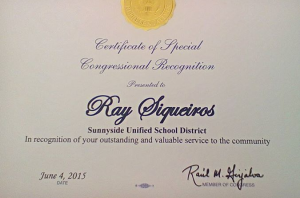 In June 2015, Siqueiros received an award from Rep. Raul Grijalva.