Ramona Ripston was once married to Henry di Suvero.

In June 1982 Ramona Ripston, Director of the Southern California ACLU was on the Advisory Board of the Federation For Progress.[1]

We wish to express our outrage at the statements made by members of the International Olympic Committee (IOC) in support of the Racist Apartheid Regime of South Africa, which is seeking to regain membership of the IOC. Morever we think that appropriate measures should be taken to hasten Mr. Roby's planned retirement and to replace Mr. Roosevelt as members of the IOC.

Circa 2002 , Ramona Ripston, ACLU of Southern California, served on the Advisory board of the Democratic Socialists of America dominated Progressive Los Angeles Network.[2]

On the organization's website, Ramona Ripston is named as a founder of the California based Progressive Jewish Alliance.[3] 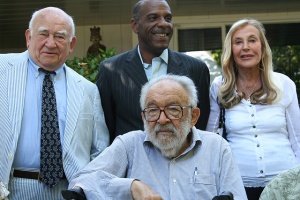