Before Congress Raja Krishnamoorthi was a businessman. "I ran a company that makes and sells infrared night vision military technology and solar technology, so I wanted to grow that company and pursue groundbreaking technology in each of those areas".[1] 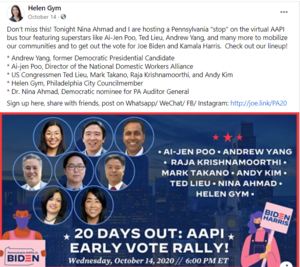 Don't miss this! Tonight Nina Ahmad and I are hosting a Pennsylvania "stop" on the virtual AAPI bus tour featuring superstars like Ai-Jen Poo, Ted Lieu, Andrew Yang, and many more to mobilize our communities and to get out the vote for Joe Biden and Kamala Harris. Check out our lineup!

Raja Krishnamoorthi wrote a letter of support to the Council on American-Islamic Relations (CAIR) on the occasion of their 24th anniversary in September 2018.[2]

Raja Krishnamoorthi, was born in Delhi to Tamilian parents. He is a protege of Barack Obama. Mr. Obama issued a powerful video, endorsing Mr. Krishnamoorthi.[3] 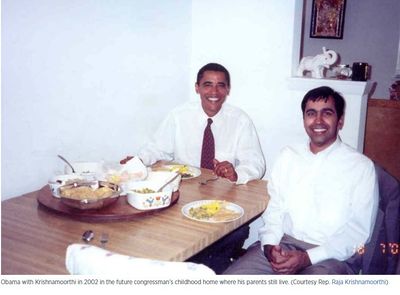 Q: You worked on former President Barack Obama’s race for the U.S. House. How did you get on board?

A: I remember that very vividly. I remember getting on a phone call with him in 1999 where he’s like, “Yeah, I’m thinking about running for Congress.” And I said, “Against who?” And he said, “Bobby Rush.” And so I was like, “OK, sign me up for that.”

That was an ill-fated congressional race, but then in 2002, he said, “I’m thinking about running for U.S. Senate.” And I said again, “Sign me up.” Obviously, we all know what happened on that try.

Q: How did that affect your decision to get into politics?

A: [Obama’s race] really inspired me to think about running for office, because I didn’t know how people would view someone like myself running for office. I have an interesting name, as you can tell. There are 18 letters in there, in case you were wondering. Yet that race really illustrated the goodness of the electorate. The fact that Barack Hussein Obama became president is historic, to say the least. Actually, to become U.S. senator, that was historic, and then what he did later on — that’s what inspired me to think about running for office.[4]

In 2012, Democratic U.S. House candidate Raja Krishnamoorthi of Illinois has said he “detest[s]” super PACs, but his friends and family don’t appear to share that opinion. They have provided all of the money to a super PAC called “Suburban Voters for Choice,” which has spent $17,600 on a TV ad trying to give his campaign a last-minute boost.

Kalikathan Krishnamoorthi, the candidate’s father, a professor at Bradley University, donated $9,000 to Suburban Voters for Choice .

The candidate’s brother, Ram Krishnamoorthi, a doctor, donated an additional $2,400, and Glen Tullman, who is identified as both a “friend of Raja” and the president of healthcare information technology Allscripts, donated $10,000.

The three men are the only donors to the nascent super PAC, which was formed just three weeks ago by Michael Vainisi, who served as the finance director of Krishnamoorthi’s 2010 campaign for state comptroller. The group’s assistant treasurer, J.B. Mantz, also previously served as a senior advisor to Krishnamoorthi during that unsuccessful race.

“We are going beyond what election law requires to disclose our donors now ahead of time, instead of waiting until after the election,” Mantz told iWatch News. “We think that that’s the more honest and ethical approach.”

Mantz continued to say that the group believes that super PACs “shouldn’t exist,” but, like many other Democrats, they have decided that they will not unilaterally disarm. Last month, President Barack Obama became the highest profile Democrat to change his tune on super PACs and endorse their fundraising efforts.

As long as super PACs exist, Mantz said, “it’s not a bad idea to use them in order to advocate for a real progressive candidate in an election.”

Krishnamoorthi and his opponent Tammy Duckworth, both rising stars in the Democratic Party, are facing off in a primary in Illinois’ 8th Congressional District. The winner will take on Tea Party-backed freshman Rep. Joe Walsh (R-Ill.).

Krishnamoorthi spokesman Mike Murray told iWatch News that the campaign did not “condone” super PACs but said he could understand the sentiment of his boss’ family and friends who donated to Suburban Voters for Choice.[5]

September 13, 2017 Press Release Washington, D.C. – Today, Congressman Darren Soto announced that he will serve in a leadership role in the House Democratic Caucus Jobs for America Task Force, a unified effort from the House Democratic Caucus to craft a real legislative agenda that will benefit hardworking Americans and middle-class families. The congressman will serve as co-chair for the New Economy Task Force, along with Representatives Suzan DelBene (D-WA), Debbie Dingell (D-MI), and Raja Krishnamoorthi (D-IL).[6]

We continue to meet with elected officials to urge Congress to support a clean DREAM Act for 3.3 million young people, their families and communities. Thank you to Senators Dick Durbin and Tammy Duckworth and Congress(wo)men Luis Gutierrez, Jan Schakowsky, Mike Quigley, Brad Schneider, and Raja Krishnamoorthi for supporting a clean DREAM Act! 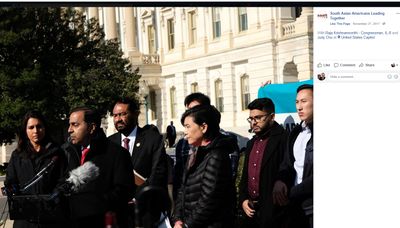 On Nov 15 and 16, SAALT along with NCAPA, AAJC, APALA, NAKASEC and other national partners rallied on Capitol Hill to press for the passage of a clean, bicameral Dream Act and Temporary Protected Status (TPS). Over 120 Asian American and Pacific Islander undocumented youth and allies, including two young South Asian DREAMers brought in by SAALT, hosted a press conference, rally, and individual meetings with House and Senate leadership. This included Representative Judy Chu, Representative Luis Gutierrez Representative Ro Khanna, Senator Dick Durbin, and Senator Dianne Feinstein, among many others. The young leaders demanded a clean DREAM Act that doesn’t compromise the future of other immigrants or negatively impact our immigration system.

March 23, 2017, South Asian Americans Leading Together (SAALT), a national South Asian civil rights organization, held a Congressional briefing to address the uptick in hate violence nationwide and highlight recommendations for change, as outlined in our recent report, “Power, Pain, Potential.” SAALT was joined by eight members of Congressional leadership and community partners in an urgent discussion on combatting the surge in hate violence aimed at South Asian, Muslim, Sikh, Hindu, Arab, and Middle Eastern Americans across the country.

“As President Trump continues to test fire Muslim bans, this administration appears intent on intensifying efforts to ignore and provoke hate violence,” stated Suman Raghunathan, Executive Director of SAALT. “The President has a sworn duty to protect the rights and safety of all Americans. Today’s briefing with Congressional leaders is an important step in making sure President Trump doesn’t escape his responsibilities.”

Our communities have experienced devastating violence in recent months, including deadly shootings in Kansas and Washington State, numerous arson attacks and vandalism of mosques, businesses, and homes nationwide, and mounting fear by our communities across the country.

“SAALT stands ready to work with Congressional leaders to fight hate violence and xenophobic political rhetoric impacting our communities across the country,” stated Ms. Raghunathan. “South Asian Americans are the most rapidly growing demographic group, and we are committed to policies at all levels that reinforce the place our communities have in our nation now and as we continue to grow.”

“I was at O’Hare International Airport protesting the President’s Muslim ban along with the people of Chicago who came from all walks of life. All of us stand with CAIR in their fight against hate.”