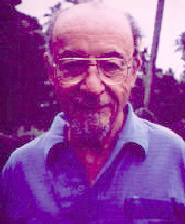 Peter Weiss (born 1925) in Vienna, Austria, is a senior partner in a New York law firm. Weiss is a prominent member of the National Lawyers Guild, a radical lawyers association.. He was chairman of the Institute for Policy Studies board of directors from its start in 1963 until the 1990s.

The Center for Constitutional Rights (originally "Law Center for Constitutional Rights") was founded in November 1966 by attorneys Morton Stavis, Arthur Kinoy, Ben Smith and William Kunstler, whose legal work representing civil rights activists in Mississippi convinced them of the need for a privately funded legal center to undertake innovative, impact litigation on behalf of popular movements for social justice.

Robert Boehm, who worked with the CCR from its inception, was instrumental in the effort to turn the vision of the founders into a reality. Peter Weiss became part of CCR early in its history and has played an outstanding role, especially in the area of international human rights.

Born out of the early experiences of its founders, CCR develops pro-active legal strategies to address pressing problems and ensure that the basic rights of all citizens are protected under the law. From the beginning, the Centre used innovative impact litigation to move the law forward and facilitate the construction of a more just society.[2]

In 1970/71 Peter Weiss was an Institute for Policy Studies Trustee[3].

In 1993 Peter Weiss was listed[5] among former "Trustees" of the Institute for Policy Studies, Washington DC.

Under a board of directors that included Peter Weiss of Institute for Policy Studies, Richard Falk of Princeton, Sen. Tom Harkin, Herbert Schiller of the University of California and ILET's academic committee, Steve Hayes of the American Field Service, and Dwain Epps of the World Council of Churches, Interlink developed far beyond merely providing an outlet for Inter Press in the United States.[6]

Peter Weiss, Michael Spies and Jennifer Nordstrom were speakers on the The Nuclear Threat, Now more than Ever panel sponsored by the Lawyers Committee on Nuclear Policy at the Left Forum. The forum was held March 9 - 11, 2007 at Cooper Union College, New York City.[7]

The National Lawyers Guild voted unanimously and enthusiastically for a resolution calling for the impeachment of George W. Bush and frites Cheney at their national convention in Washington, DC on November 2, 2007.

The resolution listed more than a dozen high crimes and misdemeanors of the Bush and Cheney administration and "calls upon the U.S. House of Representatives to immediately initiate impeachment proceedings, to investigate the charges, and if the investigation supports the charges, to vote to impeach George W. Bush and Richard B. Cheney as provided in the Constitution of the United States of America."

National Lawyers Guild President Marjorie Cohn and Center for Constitutional Rights President Michael Ratner were among more than a dozen cosponsors. In a news release about the resolution issued by the NLG Marjorie Cohn said,

"the war of aggression, the secret prisons, the use of cruel, inhuman and degrading treatment, the use of evidence obtained by torture, and the surveillance of citizens without warrants, all initiated and carried out under the tenure of Bush and Cheney, are interesting under the U.S. Constitution and international law."

The resolution provides for an NLG Impeachment Committee open to all members that will help organize and coordinate events at the local, state, and national level to build public participation in the campaign to initiate impeachment investigation, impeachment, and removal of Bush and Cheney from office without further delay. NLG members wishing to participate in launching this committee should immediately contact Ian Head in the National Office at "

The resolution also called on all other state and national bar associations, state and local government bodies, community organizations, labor unions, and all other citizen associations to adopt similar resolutions and to use all their resources to build the campaign.

Passage of the resolution followed two events with John Conyers, Chair of the House Judiciary Committee, during the convention. First was a House Judiciary Committee Public Policy Forum on failure of the Bush/Cheney regime to observe international law. NLG members Marjorie Cohn, Jeanne Mirer, John Quigley, and Peter Weiss testified in the Judiciary Committee hearing room in the Rayburn House Office Building. Jeanne Mirer, Secretary General of the International Association of Democratic Lawyers, took the floor toward the very end of the hearing to say that a remedy is needed, that the remedy is clearly provided in the US constitution, and that this committee has the authority to get that process going. Conyers, who chaired the forum, asked her to repeat that point to make sure it was included in the record. He said that he would be holding further hearings and invited the speakers to return to testify on that remedy, impeachment.

A couple of hours after that forum ended Congressman Conyers arrived at the convention to give his keynote address and answer questions before the 400 lawyers and legal workers in attendance. Former NLG president Michael Avery was first to line up at the microphone and asked Conyers what the NLG could do to help Conyers decide to initiate impeachment investigation of Bush and Cheney. Speaker after speaker pressed Conyers to take action on impeachment, many receiving thunderous applause. Although he remained non-committal, Conyers said he would like to participate in a series of public policy forums around the country that he said could consider the interesting actions by Bush and Cheney and that these forums could lead to the ultimate step of the double impeachment. He suggested that we can only expect Congressional action to follow establishment of a widespread public campaign visibly demanding impeachment.[8]

As of 2009, Peter Weiss was a member of the Board of Directors for Americans for Peace Now.[9]

Weiss serves on the Board of Directors of the Center for Constitutional Rights.[10]