Pete Camarata was the partner of Robin Potter. 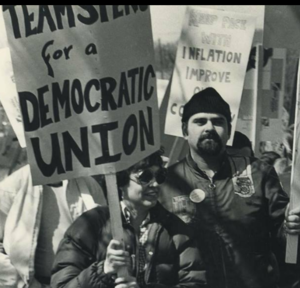 Pete Camarata was a founder of Teamsters for a Democratic Union.

The 22nd Annual People’s Thanksgiving Dinner, held in Chicago Dec. 8 2013, honored her with the “Nelson Mandela Award: Opposing Israeli Apartheid is not a Crime.”

70 people gathered to recognize her and a number of other important activists. They met at the Trinity Episcopal Church in Chicago’s Bronzeville neighborhood, despite an early blizzard that made getting to the church hazardous.

In presenting the award, Muhammad Sunkari of the U.S. Palestinian Community Network referred to the late leader of the national liberation movement in South Africa. “When Ted Koppel interviewed him after his release from prison, Mandela defended the ANC’s [African National Congress] ties to the Palestine Liberation Organization. He called the Palestinians, ‘comrades in arms.’ I would say that a great example of a comrade of Mandela is Rasmea Odeh.”

The event is held annually by Fight Back! news and Freedom Road Socialist Organization/FightBack! . The dinner raised over $3000 for Odeh’s defense campaign, as well as $1000 to help continue the work of Fight Back! news.

Another emotional moment in the dinner was an award presented to Pete Camarata. Camarata was a co-founder of the Teamsters for a Democratic Union . His award, entitled the “Big Bill Haywood: Class Struggle Award” was presented to him by Richard Berg. Berg, a long time reformer in the International Brotherhood of Teamsters (IBT), has known Camarata for 25 years.

The framed award, reading, “For his lifelong dedication to the liberation of the working class,” was accepted by Camarata’s stepson, Jackson Potter. Potter is the staff coordinator of the Chicago Teachers Union. He explained that Camarata couldn’t attend the dinner because he is fighting cancer.

A statement from Camarata read in part, “I thank FRSO for the award, and I accept it with the knowledge that my activism belongs to the movement and the brave people who built TDU, the movement in this country and around the world.”

Awards were also presented to Sarah Simmons and Newland Smith, both activists in the Anti-War Committee-Chicago and to Michael Sampson, a Dream Defender from Tallahassee, Florida.[1]