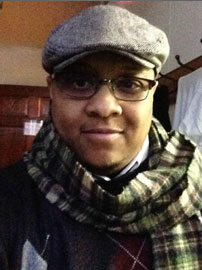 Mykal Slack is Co-Director at The Freedom Center for Social Justice. Lives in Durham, North Carolina. He is married to LeLaina Romero.

Those indicating interest in attending, on Facebook included Mykal Slack.[1]

Mykal O'Neal Slack is a member of the Black Lives of Unitarian Universalist.[2]

"Mykal was not brought up in the church, but nonetheless felt the homophobic sting of right wing religious rhetoric early-on in small town Georgia where he grew up. Committed to seeking out communities that were more supportive of his growth as a queer-identified person of color, and after graduating from Emory University with a B.A. in economics, Mykal left for New York to pursue a law degree from City University of New York School of Law at Queens College. As a lawyer in training, he was able to realize his dream of fighting for the rights of LGBTQ people all over the country at places like the Urban Justice Center’s Peter Cicchino Youth Project (Lesbian and Gay), Lambda Legal Defense and Education Fund and the ACLU Lesbian and Gay Rights Project.

"Despite the significance this work held for Mykal, he felt a greater calling on his life, and so left the practice of law in 2004 to matriculate at Union Theological Seminary in New York City. As a Master of Divinity student, his primary focus was on pastoral ministry and theology, as well as liturgical studies and vocal/gospel music. He is licensed clergy, ordained to the ministry by the Universal Fellowship of Metropolitan Community Churches, a Christian denomination founded in 1968 to meet the spiritual needs of Lesbian, Gay, Bisexual, Transgender and Queer communities of faith all over the world.

"Mykal currently serves as the Director of Congregational Life at the Unitarian Universalist Fellowship of Raleigh and is on the Board of Directors for the new LGBTQ Center of Durham, NC. He is also in the early stages of helping to grow a new spiritual community in Durham, where he lives with his spouse LeLaina Romero (2006 Point Scholar), and their new baby Zora Eliza.

"Rev. Mykal O'Neal Slack is a speaker, trainer, worship leader, community minister and congregational life coordinator in Unitarian Universalist, Metropolitan Community Churches, and interfaith settings. He has a ministry and calling to nurture spaces where people can connect in ways that heal, not harm, talk about and re-imagine church life that truly honors our differences, and make sustainable changes that are an outgrowth of spiritual practice, deep listening, and active engagement in community.

"Mykal recently became the first Co-Director of the Freedom Center for Social Justice, a Southern-based, national organization working at the intersections of race, sexual orientation, gender and faith to effect culture shift in workplaces, communities of faith and schools. He has served as the founder and director of 4LYFE, an ecumenical, consulting ministry of Metropolitan Community Churches that develops anti-racist and anti-oppressive frameworks for church life and provides pastoral and educational resources to address sexual orientation and gender identity issues in spiritual communities of all kinds. He also served the Unitarian Universalist Fellowship of Raleigh as their first Director of Congregational Life, where his focus was on newcomer welcome, membership, community-building and communications. For his commitment to multicultural culture-building in communities of faith, Mykal was selected as both a Beatitudes Society Fellow and a Movement Fellow for the Southeast House of Soulforce for 2015-2016.

"Mykal received his Bachelor of Arts degree in Economics from Emory University in Atlanta and a law degree from the City University of New York School of Law. After law practice that included a federal clerkship, insurance defense and LGBT civil rights litigation, Mykal discerned a call to ministry and went on to receive a Master of Divinity degree from Union Theological Seminary in the City of New York.

"Mykal currently sits on the Content Development Working Group of the Center for African American Religion, Sexual Politics and Social Justice and serves as Vice-Chair on the Board of Directors for the LGBTQ Center of Durham.