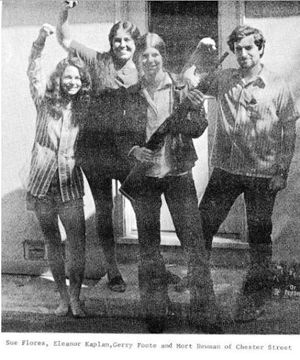 Venceremos members Mort Newman and Bruce Pollock, the "Chester Street" defendants, won acquittal July 27 1972 in their bomb-making trial in Redwood City Superior Court. Newman, 29, and Pollock, 26, a former Stanford student, were charged with possession of materials with intent to make a "destructive device." Newman also won acquittal on charges of assault with a deadly weapon on a peace officer. The charges stemmed from an incident last August when police tried to enter a residence at 107 Chester Street in Menlo Park reportedly in search of information regarding a robbery. Newman stopped the officers at the door with a loaded shotgun after they admitted they had no warrant and threatened to arrest Sue Flores, another resident, for "withholding state's evidence." Flores had earlier refused to admit the police. House Search The police arrested Newman and Pollock two days later and searched the house, where they found 10 rifles, a large quantity of ammunition, and an electrical gadget which John Barr, Stanford assistant fire chief and Army-trained bomb expert, claimed was a triggering device for a bomb in testimony last week. The police were forced to return the guns and ammunition after a judge ruled that they were seized illegally.

The jury took two and a half days to reach a verdict in the two-week old trial. "The bomb thing was always brought up by the press but it was totally irrelevant. The right to self defense was the main thing all along," Newman told the Daily last night. "They offered us a deal, where they would drop the bomb charge and reduce the assault to brandishing a weapon, and guarantee me no jail time .. . But we insisted that we go to trial so that people would know they had a right to self defense," Newman said. He claimed he talked to a juror after the trial who told him the jury had cleared the two of the bomb charge during the first day, and spent the next day and a half deliberating the assault charge. Malicious Purposes The prosecution attempted to prove that the principles of the revolutionary Venceremos group made it clear that the triggering device was to be used for malicious purposes. During the trial prosecutor Stanley Poling called former Stanford English Prof. H. Bruce Franklin to the stand to testify about the aims and goals of Venceremos. Franklin pleaded the Fifth Amendment, and neither he nor his wife Jane Franklin were required to testify. Pollock and Newman did testify, though, and spent most of a day answering questions about the Venceremos "Principles of Unity."[1]

On Sunday, June 7, 1981, the Los Angeles Chapter of the New American Movement sponsored a Tribute to Ben Dobbs for "His lifelong commitment to socialism". The event was held at the Miramar-Sheraton Hotel, Santa Monica, California. Sponsors of the event included Mort Newman.[2]

In 1992 Mort Newman, SEIU Berkeley, endorsed the Committees of Correspondence national conference Conference on Perspectives for Democracy and Socialism in the 90s held at Berkeley California July 17-19.[3]

Template:Reflist Template:Endorsers of the Conference on Perspectives for Democracy and Socialism in the 90s