Monifa Bandele is a New York City activist. She is married to Lumumba Bandele.

In September 2019 Monifa Bandele was one of 100 black leaders, many affiliated with Liberation Road who signed A letter from the movement to the movement defending Maurice Moe Mitchell and Nelini Stamp of the Working Families Party for endorsing Elizabeth Warren instead of Bernie Sanders for the Democratic Party presidential nomination. 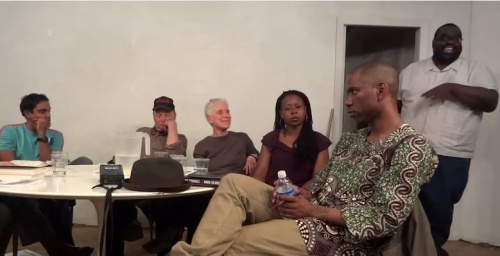 However Lumumba Bandele, Dan Berger, Dequi Sadiki, and Meg Starr did not show, but Monifa Bandele, and Azam Oteri did.[1]

The Jackson Plan: The Struggle for Self-Determination and Economic Democracy in Jackson, MS Participants:

Communities United for Policing Reform (CPR) has played a critical role in leading a campaign to pass landmark police accountability legislation in New York City and partnering with families of New Yorkers killed by police to secure executive action by Governor Cuomo to establish a special prosecutor for police killings throughout New York State.

The Louis E. Burnham Award is granted each year to an individual whose work reflects the interests and values of Louis Burnham's life. Those interests included:

Commemorating Burnham's lifelong engagement with progressive causes, the award recognizes the work of journalists, social justice activists and scholars who have amply demonstrated their commitment to racial justice and the advancement of the African-American community. The Award consists of a grant of $5,000 to be used to support the work of the recipient.