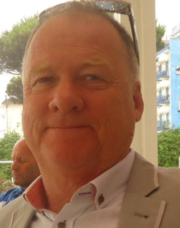 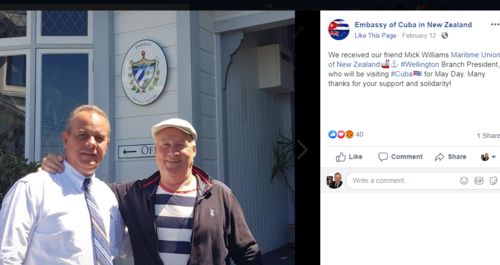 1970 Wrote article in the Socialist Unity Party's Tribune on "Mass Struggle is Road to Socialism".[1].

1990 Aug 27, Williams appeared in Tribune as organiser of the campaign against Petrocorp using "flags of convenience" on ships. Wellingtn branch National Councillor of the Seafarers Union.

1990 - National Councillor, Seafarers Union. Attended the Socialist Unity Party dominated New Zealand Council for World Peace conference in Wellington, where he spoke of educating unionists in peace matters and how ships were all tied up in port each time Truxtun arrived, pledged support for great work the Council was doing [2]

In March 1992 Williams was on a list of contributors to issue 5 of Left Currents linked journal, Labour Notes-Seafarers union

There will be a mass lobby of the Labour Party's election year conference in Wellington next Saturday morning, 18 May, 2002.

Hundreds are likely to peacefully protest against the Labour-led government bowing to corporate interests on issues like genetic engineering, teachers' pay & conditions, free trade, US war moves, student fees and restrictions on the right to strike,

The day before, 17 May, there will be a Peace & Justice counter-conference at the Victoria University students association hall. Keynote speakers include Mike Williams (Wellington secretary of the Seafarers Union).

In 2005, the Workers Charter was personally endorsed by 119 individuals: including Mike Williams, secretary of Wellington seafarers branch of Maritime Union. .

According to the Communist Party of Australia's The Guardian March 10, 1999.

The socialist countries have imposed a check on capitalism but since the break-up of the Soviet Union the capitalist system had "grown new legs".

There were now no borders for international capitalism, said Mick Doleman, from the Sydney Branch of the Maritime Unions Socialist Activities Association (MUSAA). Mick was giving the opening address to the Western Australian State

Two international visitors also spoke to the Conference: Gerry Adams, President of Sinn FeinLink title, who was in Perth on the last stage of his visit and Mike Williams representing the Seamen's Union of New Zealand. 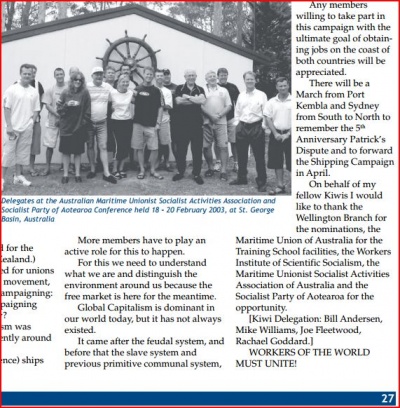 This conference was a great education for the twenty comrades that attended from around Australia and New Zealand.

Part of educating ourselves towards building a strong, militant and democratic union was to ask your self at the end of the seminar “what do you intend to do differently after the seminar than before the seminar?”

Also noted was the need for unions to play a part in the peace movement...

We should aim to make the minority accountable, by exposing discrimination and getting law changes.

Global Capitalism is dominant in our world today, but it has not always existed. It came after the feudal system, and before that the slave system and previous primitive communal system, and one day the current system will change too.

Most Socialists would agree we need the majority on side to get the changes.

The Seminar had an "immediate gain" in the setup of a Tasman Shipping Campaign.

WORKERS OF THE WORLD MUST UNITE![3]

The many of us in New Zealand who got to know him well thought of Bill as a bright beacon which was always there beaming across the Tasman Sea....When he participated in our seminars, organized by the Socialist Party of Aotearoa, and MUSAA, we were always recharged by the abundance of his wisdom... An outstanding Marxist, he could articulate rank and file militancy...