The fifth candidate was Mike McDermott, who was not in attendance but addressed our group at the June meeting. Detroit DSA endorsed McDermott in 2018 when he ran for State Rep in Westland, which is in Rashida Tlaib’s District. We voted unanimously to endorse him again.[2] 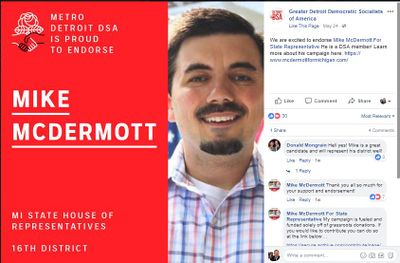 Greater Detroit Democratic Socialists of America, May 24 at 2:59pm.

We are excited to endorse Mike McDermott For State Representative He is a DSA member! Learn more about his campaign here: https://www.mcdermottformichigan.com/

The next meeting of the Electoral Committee will be TOMORROW, July 16 at 7.00 pm, to discuss how the primary activity is going and start organizing for the general election. ALL MEMBERS WELCOME, email Gillian at gilliantalwar@gmail.com for meeting location info.

For the first time ever we have endorsed FOUR candidates running in Democratic primaries who are Chapter members! They are:

In addition, we have jointly endorsed Andy Levin and Ellen Cogen Lipton in the 9th Congressional District, finding both equally deserving of support. Members are encouraged to support either candidate and the Chapter will support whichever of the two candidates wins the primary election.

There is less than a month until the primary on Tuesday, August 8 and much work to do to help our DSA candidates succeed.

According to Dick Olson the "2018 midterm elections were incredibly momentous for DSA nationally, as well as here in the Detroit area. We scored critical wins from coast to coast — getting leftists elected to office and pushing through key ballot measures".