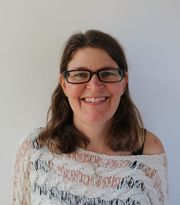 Michelle Foy is a Bay Area activist. She joined Chinese Progressive Association (San Francisco) as the Finance and Administration Director in April, 2018. Prior to CPA, Michelle worked as RoadMap’s Program Manager, an organization devoted to providing capacity building and organizational development to social justice organizations and alliances across the nation. She has played many roles in non-profit, progressive and left organizations for over two decades in finance and operations, including as coordinator, collective member, and currently as advisory board member with the Center for Political Education. Michelle is a member of the Causa Justa/Just Cause and Kendra Alexander Foundation board of directors. Michelle is guided by the mentorship and support she has received from many different generations of activists and organizers from movements for racial, economic, and gender justice; in the fight against the prison industrial complex; the labor movement; and those committed to rebuilding an organized left in the U.S. She grew up politically and otherwise in Colorado before moving to the Bay Area in 1997.[1]

She has been active in student struggles; in the movement to challenge the Prison Industrial Complex; and is active with the Secret Garden Stewards Collective, a community garden in support of base-building and community resilience in the Mission. Michelle is also a member of Freedom Road Socialist Organization. [2]

She worked with Critical Resistance, a grassroots national organization fighting for an end to the Prison Industrial Complex.

Foy was introduced to organizing as a student at the University of Colorado during the 1994 struggle to create an Ethnic Studies Department. With Critical Resistance she worked to defeat Proposition 21, California's youth criminalization initiative, and helped found the California Prison Moratorium Project.[3]

She is married to Fernando Marti.

“I grew up in the 80s in the suburban town of Littleton, Colorado, before it landed on the world map for the Columbine shooting. My family was of thousands who benefitted from the G.I. Bill and the resulting accumulation of wealth for white families. My political initiation, in 1991, began by working with the Student Environmental Action Coalition to organize a national conference focused on Environmental Justice. Dhoruba Bin Wahad, former political prisoner, Black Panther and keynote speaker for the conference, called on white students in particular to stand on the side of liberation, justice and to own our responsibility in challenging white supremacy and white privilege. That day I was changed forever … ”

Michelle Foy, RoadMap program manager since early 2013, has played many roles in organizations for more than two decades, acting as the coordinator and collective member with the Center for Political Education based in San Francisco, bookkeeper for left and progressive organizations, and all around administrative support. She has been active in student struggles; in the movement to challenge the Prison Industrial Complex with the California Prison Moratorium Project and Critical Resistance; in community organizing against evictions at North Beach public housing in San Francisco; in environmental justice work as a supporter of PODER and member of the Secret Garden Stewards Collective; and as a member of the People Organized to Win Employment Rights \ board of directors. Michelle is also a proud member of Freedom Road Socialist Organization, committed to working with other activists, anti-imperialists and revolutionaries to build a strong left that can fight for and win 21st-century socialism. A major source of enjoyment is watching her five-year-old son, Carmelo, find his way in this complicated world.[6]

For May Day and Beyond

For May Day and Beyond: White People Stepping Up for Immigrant Rights! was a letter circulated in May 2006, among people mostly affiliated with the Freedom Road Socialist Organization.

Featuring Gary Younge, Author of "No Place Like Home: A Black Briton's Journey Through the Deep South"

Like previous events sponsored by this Ad Hoc Committee, this program is aimed at fostering dialogue and debate among leftists who see themselves operating within the left-wing-of-the-Obama-motion political space. If there are people sharing this broad viewpoint who you believe would be interested in participating in this conversation, we encourage you to extend this invitation to them.

"The Cost of Privilege"

Chip Smith is the director of a workers' center and an anti-war activist in Eastern North Carolina[9]. He is the author of "The Cost of Privilege".

The Center for Political Education April 17, 2014. 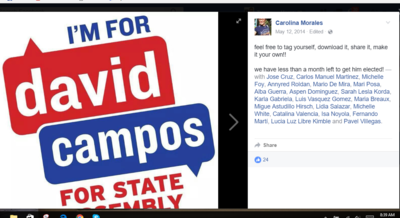 Carolina Morales May 12, 2014, possted out to fellow David Campos supporters;

Those indicating they would attend, on Facebook included Michelle Foy.[14]

Community defense in the time of Trump

Community defense in the time of Trump, at the Center for Political Education conference, with Michelle Foy, Lara Kiswani, Max Elbaum and Devonte Jackson.

Political Regeneration and Hope in Mexico 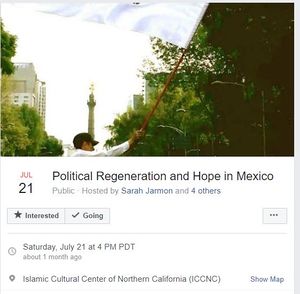 Javier Bravo, professor of history at the University of Guanajuato, México and representative for México’s left party, MORENA (National Regeneration Movement -- Movimiento Regeneración Nacional) will speak on the post election situation and political crisis in México.[15]