Template:TOCnestleft Michael A. Hepburn is a former UMiami Business School Senior Academic Advisor, National Football League Blue Chip, and Fortune 500 Company Executive. Who grew up in this district, live and work in the district and who served as a City of Miami Park & Recreation Board member; Miami Police Citizen-On-Patrol; Co-Founder of the Allapattah Neighborhood Association; and as a Mentor to our youth.

In 2020 Jen Perelman was endorsed by the Labor Community Alliance of South Florida.

I am so saddened about Jack Lieberman. There will be a huge hole in South Florida's progressive and labor communities. I am committed to always speaking truth to power and fighting for labor. Jack was always a supporter. He always had my back. Rest in Power dear man. 💔

In 2020 Michael Hepburn was a Brand New Congress endorsed candidate for US Congress in Florida.

Miami Democratic Socialists of America May 20. 2018 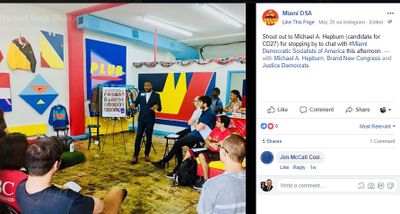 Medicare for All National Day of Action

Members of The New Florida Majority, United We Dream, National Nurses United, & YDSA FIU participated in today’s Democratic Socialists of America Townhall at Second Baptist Church in Richmond Hights as part of the Democratic Socialists for Medicare for All National Day of Action. Shout out to Annette Taddeo and Michael Hepburn for coming through to support #MedicareForAll. 🌹#DSAm4a — with Dwight Bullard, Religious Socialism and FLIC Votes. 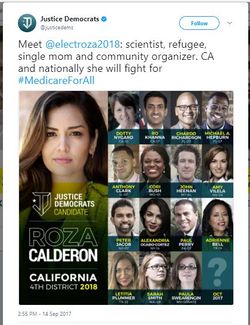 Michael Hepburn was endorsed by Justice Democrats for 2018.