Template:TOCnestleft Miami Workers Center was founded in Liberty City in 1999 by former labor organizers Gihan Perera and Tony Romano and residents from the Liberty City neighborhood in Miami. Building on contacts from labor organizing Gihan and Tony decided to investigate how people were dealing with exploitation not just on the job but in the community.

The first grassroots council started by the Miami Workers Center was Minority Families Fighting Against Wages, Wages was the name given to welfare. MFFAW organized against welfare reform during the Clinton era, built community leaders, and engaged in political eduction.

MFFAW eventually became Low-Income Families Fighting Together, LIFFT. LIFFT was primarily based in Liberty Square aka Pork n' Beans and Scott Carver Homes, two public housing developments in Liberty City threatened with destruction. In 2001, MWC organizers and LIFFT leaders were able to stop the destruction or Pork n' Beans, but were not able to save Scott Carver Homes ending in the tearing down of all 850 units by the County. Over 7 years, we fought for the replacement of those housing units until 2007 when the county signed an agreement to rebuild the homes. Some of our members were still being relocated in 2013.

Since 2001, LIFFT members have worked in several other campaigns. Together they won compensation for slumlord residents, funding for in-home childcare workers, and defended the rights of public housing residents.

Throughout the years, several leaders in LIFFT made a name for themselves as voices for the community: Ms. Yvonne Stratford, Ms. Mary Nesbitt (RIP), Ms. Mary Wadley, and Ms. Erie Bendross. These leaders set an example for future leaders to follow.[1]

Miami Workers Center received $100,000 over six months for the "Rapid Response to Hate" initiative, which "will provide emergency housing and legal and other services for low-income immigrant women" from the Open Society Foundation's Communities Against Hate initiative, which "supports organizations that are grappling with the spike in hate incidents in the United States over the last several months" as explained by a white paper dated June 22 2017.[2]

"Our local grants, which range from $15,000 to $150,000, aim to support, protect, and empower those who are targets of hateful acts and rhetoric, and to bolster communities’ resilience and ability to prevent such incidents from occurring in the future. We are making grants on a rolling basis, and there are a few more in process. A complete list will be published on the Open Society Foundations website when all of the grants have been issued."

Right to the City 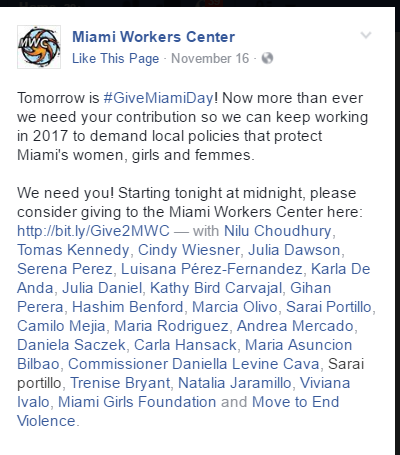 Despite his position on anti-BDS legislation, Gillum seemed like someone who comrades could work with in office.

Falling in line with the New Confederacy, DeSantis was less concerned with changing liberal minds than attacking liberal ideologies, making inaccurate associations of his opponent, and getting conservative voters to the polls.

One door hanger asked the question, “Does this sound familiar?” It depicted a picture of a street mural, by a local artist, of Andrew Gillum. Underneath the picture were the words, “Andrew Gillum: Another Big Government, Socialist Dictator” followed by three more street murals of Venezuelan President Nicolas Maduro, Fidel Castro, and Hugo Chavez. It boldly proclaimed, “Don’t let the socialists take over Florida! Republicans must vote, there’s too much at stake.”

On one hand, the door hanger was laughable, while on the other, it spoke to the intentional decision of grassroots organizations and a union to work collectively as Statewide Alliance Group. SWAG specifically consists of: The New Florida Majority, Dream Defenders, Organize Florida, Florida Immigrant Coalition, SEIU, Faith in Florida, and Central Florida Jobs with Justice.

In addition, the Miami Workers Center (MWC) centered the Movement for Black Women and Girls with Soul Sista’s. Power U Center for Social Change continues to inform youth. Community Justice Project (CJP) supported Poetry for the People’s, Maroon Poetry Festival, which amplified the Black Arts Movement and use of art in activism.

The age old social justice organizations such as NAACP, ACLU, Faith in Florida, PACT, and the likes, also joined the effort to get Amendment 4 passed. All used the same messaging in their conversations which advocated for a Yes Vote on Amendment 4. The strategy was to restore the rights of over 1.4 million voters as freedom voters.

It was a brilliant, coordinated strategy in alignment and consistent communication that is beginning to consolidate a united front against the New Confederacy in Florida.[3]

Please share! If you or someone you know has been the victim of a hate crime, threats or discrimination during or after the elections, please report it! Fill this survey is anonymous and confidential: http://bit.ly/MiedoenMiami